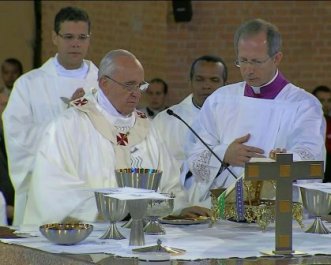 Security for Pope Francis' visit to Brazil has been raised after an incident involving his motorcade, a Brazilian federal official told CNN.

The papal visit is now classified at the highest level of security -- it was raised to "high risk" from "medium risk" after his car got stuck in a crowd of enthusiastic followers Monday, the official said.

The source says the problem in part stemmed from the pope instructing drivers not to avoid crowds.

After Francis arrived in Brazil on Monday, he got into a silver hatchback Fiat for the drive from the airport to downtown Rio de Janeiro. Along the route, the vehicle became pinned between a bus and a crush of well-wishers who were reaching into the car to touch the pope.

Federal authorities are now taking a larger role in Francis' security during his time in Brazil.

Hundreds of thousands of pilgrims from around the globe have come to Rio for World Youth Day, a weeklong festival held every two years. The Vatican told reporters that 500,000 people came to Copacabana Beach for the opening ceremony and Mass. Crowds stretched down the beach for more than half a mile from the main stage.

A call for hope

The pope traveled Wednesday morning to the town of Aparecida, the site of a shrine to Our Lady of Aparecida, a clay statue of the Virgin Mary and one of the patron saints of Brazil.

A large crowd -- braving rain -- cheered as the pope emerged from the helicopter that took him to the site, where he held Mass.

In his homily, the pope called on the faithful to find hope in God.

"It is true that nowadays, to some extent, everyone, including our young people, feels attracted by the many idols which take the place of God and appear to offer hope: money, success, power, pleasure," Francis said. "Often, a growing sense of loneliness and emptiness in the hearts of many people leads them to seek satisfaction in these ephemeral idols."

His was an upbeat message, encouraging "openness to being surprised by God" and proclaiming that "Christians cannot be pessimists."