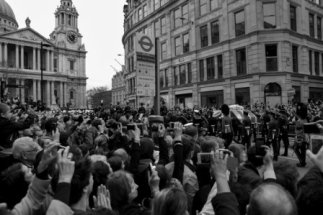 In scenes that echoed the divisions Thatcher drove through Britain as she transformed the economy and society during the 1980s, people of all social classes lined the route from the Palace of Westminster to St. Paul's Cathedral, some to pay tribute, some to condemn and many to just get close to a spectacular state occasion.

"I had to be here," said Ian Twin, a child of the Thatcher era from Essex in eastern England who had traveled from his home in New York to be here for the funeral.

He typified the sort of person for whom Thatcher's legacy of free-market economics and individuality had the greatest impact.

"I was a boy in the 1980s. Rightly or wrongly, she changed the landscape of the UK forever, and she made me feel I could do anything," said Twin, now an executive in public relations -- an industry virtually unknown before the Thatcher revolution.

Others in the crowd felt she had left a less positive legacy and mourned the passing of what they recall as a kinder, gentler Britain.

At Ludgate Circus on the approach to St. Paul's, a crowd of about 50 protesters waved Socialist Worker placards, a sign reading "Anarchists Against Thatcher" and rainbow-hued "Peace" flags. Another held a sign demanding "Where was her respect for Goldthorpe and the miners?" referring to her campaign against the power of coal-mining unions, a move that all but closed the industry.

Current Conservative Prime Minister David Cameron, who led mourners in Christopher Wren's masterpiece, earlier told a radio interviewer that all Britons were in some sense Thatcherite now that her brand of self-sufficient, can-do economics drove political discourse in the country and most of the western world. That wasn't how protesters on the funeral route saw it.

Rowland, from London, who would only give his first name was among those waving Socialist Worker placards reading: "We remember: The miners, Falklands, Poll Tax, Bobby Sands. Now bury Thatcherism," a summing up of the coal battles, the Falklands Conflict, a hated tax based on homes and an Irish Republican Army convict who died on hunger strike.

"I'm not here to celebrate Thatcher's death, which I think some are," Rowland said. "I'm here because this shouldn't have been made a state funeral. David Cameron and others have tried to present this as a moment of state unity, but she's not a unifying figure -- the ideas she represents are continuing to do great harm to the country."

For the most part protesters were drowned out by the ordinary public, tourists and those who genuinely came to pay final respects to a woman who transformed Britain and, in some cases, their own lives.

"We know what the UK was like before 1979 and it wasn't pleasant," said Lionel Voke, an activist in the Conservative Party that the "Iron Lady" led to three election victories. "I started my own business in the 1970s, and it thrived in the 80s -- I credit Margaret Thatcher for that."

London police, well used to running security in a city where the pomp and ceremony of royal and state occasions is a feature of life, had warned protesters to exercise carefully their right to object to what Thatcher stood for. Turning their backs on the military procession carrying Thatcher's casket would be okay: yelling obscenities and throwing objects would not.

Even some of the protesters were of a very British kind, polite to a fault.

"Rest in Peace, but Kindness is better than Greed," read one sign, carried by James Wilkinson, 49, from London.

"It's a protest, but a mild one," he explained. "I really wanted to see the spectacle, I admit that, but I thought if I came, I had to show that I'm no fan of Margaret Thatcher. I didn't think she warranted such an occasion."

Further along the street, the conservative Voken understood a little of those sentiments: "Whether you like someone or not, and whether you like what they did or not, you have to be respectful. We're here out of respect -- to us, she was wonderful. I accept that not everyone sees it the same way, but it's the same if Tony Blair died. I wouldn't necessarily come, but I'd expect him to be treated with respect, and I'd want him to rest in peace."

Blair led the reformed Labour Party to victory over the Conservatives in 1997, seven years after she was unceremoniously bundled out of office by a political coup of colleagues. He was among the mourners at her funeral under the spectacular dome of St Paul's, his presence a reminder that Thatcher believed the adoption of free market economic policies by the rival Labour Party was perhaps her greatest achievement -- an orthodoxy few in the political mainstream challenge despite the banking crisis and a lengthy recession.

The funeral -- officially ceremonial rather than a state occasion in a distinction invisible to all but the most pedantic royal watcher -- was the first for a former prime minister and war leader since Winston Churchill's body was borne along the same route a generation ago: in his case World War II, in hers the Falklands conflict against Argentina.

It was the Falklands that made it fitting that pall-bearers from all the UK armed services carried her coffin into the cathedral, having escorted it on a gun carriage from the official church of the Royal Air Force. The procession then made its way down Fleet Street, former home of the powerful British newspaper industry which did much to bolster her support and which was itself transformed by her union-busting market reforms. Fleet Street is now home mostly to international bankers rather than the journalists who wrote up her era.