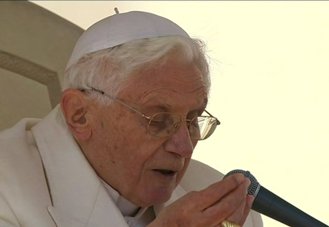 (CNN) -- Pope Francis will recite the story of Christ's last hours in a Good Friday service at St. Peter's Basilica before heading to one of Rome's most famous landmarks, the Colosseum, to lead the Way of the Cross ceremony.

The reading of the account of the Lord's Passion, from the gospels, will be echoed in Roman Catholic churches around the world on Friday.

To celebrate the Way of the Cross, or Via Crucis, the pope will lead a candlelit procession around the Roman amphitheater, according to Vatican Radio.

In Jerusalem, a similar procession takes place every Good Friday along the winding streets of the old city.

It's the first time Francis has led events on Good Friday, one of the most important days of the Christian calendar, as the head of the Catholic Church.

Mass is not celebrated on Good Friday, so the communion distributed at the Celebration of the Lord's Passion is consecrated on Holy Thursday.

On Thursday, Francis broke with tradition by going to a youth detention center in Rome, rather than the city's chief cathedral, where he washed the feet of a dozen young detainees. Among the group at the Casal del Marmo were two women and two Muslims.

The girls whose feet Francis washed in another move away from custom, were an Italian and an Eastern European, according to the Vatican.

The pontiff poured water over the young offenders' feet, wiped them with a white towel and kissed them.

In his homily, given to about 50 young offenders, he said that everyone should help one another. "As a priest and as a bishop, I should be at your service. It is a duty that comes from my heart," he said.

The act of foot-washing at the Mass of the Lord's Supper on Holy Thursday is part of the Christian tradition that mirrors Jesus' washing of his disciples' feet.

More than 2,000 cardinals, archbishops, bishops and priests, as well as more than 10,000 of the Roman Catholic faithful, joined the pope in celebrating Mass in St. Peter's Basilica on Thursday morning.

There, he urged them to stay close to their congregations and their concerns. The priests should be "shepherds who have the smell of their sheep," he said.

The Holy Week celebrations will culminate on Easter Sunday with the pope's first "Urbi et Orbi" blessing, directed to the city of Rome and to the world.

Thousands of believers are expected to gather in St. Peter's Square for the occasion.

Francis was installed as pope 10 days ago, having been elected to fill the shoes of Benedict XVI.

Since taking on the role, he has focused on a message of helping the poor and needy and demonstrated a simple, humble personal style.