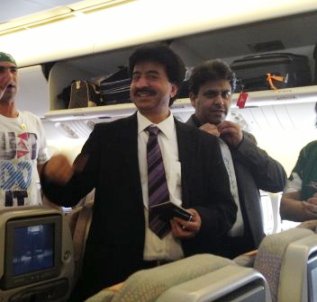 A bystander hurled a shoe at former Pakistani President Pervez Musharraf on Friday, CNN affiliate Geo TV reported, as he headed into a Karachi court to seek a bail extension.

It was unclear whether the shoe hit the former president, who was surrounded by a crowd, the affiliate said.

Despite the incident outside court, judges granted him a bail extension, according to his spokesman, Aasia Ishaque.

There are three court cases pending against Musharraf, and Friday's bail extension applies to all three of them, Ishaque said.

The court initially granted him preemptive bail to ward off a potential arrest when he returned back to the country about a week ago.

Musharraf resigned as president of the south Asian nation five years ago and went into exile in London and Dubai. He returned Sunday, saying he planned to face the accusations and run for presidency in May elections.

Some Pakistanis are happy to see the return of the former strongman, hoping his leadership would help to restore order to the country riddled with political division and plagued by extremist violence.

But he also made many enemies in the final years of his presidency. Taliban militants have threatened to kill the former president.

After the September 11, 2001, terror attacks against the United States, Musharraf supported the American war on terror and targeted the Taliban. The militants accused him of pushing an American agenda in Pakistan.

A series of legal troubles

Musharraf's popularity began declining in 2007 after he suspended the nation's Supreme Court chief justice for "misuse of authority." The move resulted in protests and accusations that he was attempting to influence the court's ruling on whether he could seek another five-year term.

He faces accusations in the Karachi court that he illegally deposed and detained 62 senior judges during a period of emergency rule he imposed six years ago.

He is also accused of not doing enough to protect the life of former Prime Minister Benazir Bhutto, the country's first female to be elected to that office. Her attack came months after she survived an assassination attempt in Karachi.

Authorities want Musharraf arrested for not doing enough to protect Bhutto's life despite numerous threats. The former military ruler has denied having anything to do with the killing.

And there are allegations he killed a tribal leader in the southwestern province of Balochistan.

In addition to managing legal troubles, the former general, who became president after a bloodless coup in 1999, must also avoid assassination at the hand of the Taliban, who, shortly before his return to Pakistan, declared they were sending a "death squad" after him.

He is also strapped with bothersome financial woes.

Last year, Pakistani authorities confiscated his property and froze his bank account. They have accused him of not declaring foreign bank accounts he had in his name.