Why Kenya Poll Ruling Is a Test of Its Democracy 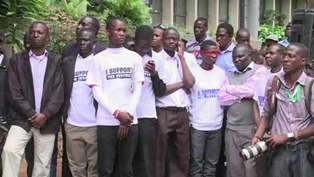 (CNN) -- Tensions are high in Kenya after the recent general elections saw front-runner, Prime Minister Raila Odinga, contest the Electoral commission's decision to declare Uhuru Kenyatta the winner. And nowhere is the tension more palpable than on social network platforms such as Facebook and Twitter.

Online, supporters of Uhuru Kenyatta and Raila Odinga often engage in a war of words that reveal deep tribal animosity. But the common ground that both groups seem to stand on is confidence that the Supreme Court -- set up under the new constitution -- will give the case a fair hearing.

"I would say that the constitution of Kenya that was put in place in 2010 has considered the scenario we are currently facing," said Charles Kanjama, a partner at Kenyan law firm Muma and Kanjama advocates.

"The reason why the different political parties are confident and have recourse to the court is because they're very clear that the court can deal with this."

At the center of the court case is the Independent Electoral and Boundaries Commission of Kenya (IEBC) which Raila Odinga accuses of failing to ensure a free and fair election and thus subverting the outcome of the presidential election. Electoral officials deny any voter manipulation, and the IEBS says it is confident that the final result was credible.

The Supreme Court, meanwhile, has ordered a partial recount to determine whether the number of votes was higher than the number of registered voters.

Kenyatta narrowly won the presidential poll, clinching 50.07% of the vote, just breaking past the halfway mark needed for the victory.

Raila Odinga has called for a new election. He and many of his supporters say that the court case is a test of Kenya's democracy.

"This is a crisis in the very workings of the faith that Kenyans have placed in their institutions to respect their democratic rights and the rule of law. It is democracy that is on trial," Odinga said.

For Kenya's Supreme Court, the stakes are incredibly high -- there is the question of ensuring the country's confidence in its institutions after the disputed 2007 election when some 1,000 people were killed after Odinga also lost that vote, claiming the election had been rigged. He later became prime minister in a power-sharing agreement.

With this election, it has been relatively peaceful -- and it is hoped that things will remain that way as the country waits for the court ruling.

The law gives the Supreme Court timelines within which it needs to arrive at a verdict. In this case, the court has until the Saturday of the Easter holiday to make a ruling.

Analysts in the Kenyan media are saying that if Kenyans across the political sphere can abide by their decision, no matter how it goes, then it will truly be evidence that the country has moved on.