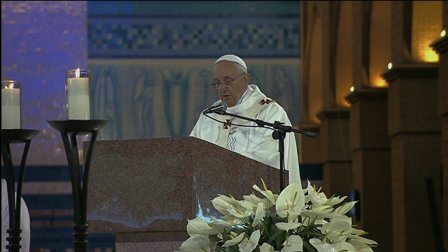 VATICAN CITY (CNN) -- The Vatican pushed back Friday against accusations against Pope Francis for his actions amid Argentina's military dictatorship that have resurfaced since his election two days ago.

A book by investigative reporter Horacio Verbitsky accuses Francis, who was then referred to as Jorge Mario Bergoglio and was head of the country's Jesuit order but not yet a bishop, of deliberately failing to protect two Jesuit priests who were imprisoned by the government.

But the Rev. Federico Lombardi, a Vatican spokesman, dismissed the claims, which date back to the dictatorship from 1976 to 1983, as false and defamatory.

"The campaign against Bergoglio is well known and goes back to many years ago. It was promoted by a defamatory publication," Lombardi said at a Vatican news conference.

Argentine judicial authorities questioned Bergoglio once, but nothing was imputed against him, Lombardi said, adding that Bergoglio denied the allegations against him.

"His role is well noted on how he promoted reconciliation in Argentina," he said.

Lombardi said the negative concerns being raised now were not surprising in light of the attention focused on Pope Francis.

"We are used to this sort of campaign," he said. "We have a clear conscience, so we will continue with the clear-cut line, which is characteristic of this man and makes him very credible," he said.

The claims have cast a shadow over what has otherwise been widely viewed as a positive start for the new pontiff, who has embraced humility and simplicity.

As pope, Francis will have other tough questions to deal with. He takes the helm of a Roman Catholic Church that has been rocked in recent years by sex abuse by priests, and claims of corruption and infighting among the church hierarchy.

After the pomp and activities surrounding his election as pontiff, Pope Francis is enjoying a quieter day Friday -- meeting with all the Catholic cardinals, who wait to see what changes he will make.

"In these days, we have noticed the effect and solidarity of the universal church, and also the interest of so many people who may not share our faith," he said. "Nonetheless, they respect it and admire the church and the Holy See."

It was "very moving" to meet the people who had waited to see the presentation of the pope in St. Peter's Square, he said.

Francis also expressed his gratitude to Benedict XVI, saying that during his nearly eight years as pontiff, he had "reinvigorated the church with his goodness, faith, knowledge and humility."

He had words of encouragement for the cardinals, too, saying they were a community and urging them to "not let us give way to pessimism."

Friday's gathering, aired on Vatican TV, gave the new pontiff a chance to catch up with the cardinals who were not eligible to vote in the conclave -- those age 80 or older. That's nearly half of all cardinals.

Remarking on the fact that many were getting on in years, he said the cardinals should pass on their experience to younger generations. "Wisdom is like a good bottle of wine, and we must give it to the young people," he said.

The pope, dressed simply in white, then exchanged a few warm words with each cardinal as they left the hall one by one.

Come Tuesday, St. Peter's Square will again bustle with the faithful, tourists and locals during the official Mass to inaugurate him as the bishop of Rome.

The choice of day to anoint Francis as the holy father of the Catholic Church carries a rich symbolism: It is the day that Catholics celebrate the Feast of St. Joseph to honor Jesus' father on Earth, the carpenter Joseph. It also happens to be Father's Day in Italy.

The square is expected to fill up again with as many as 100,000 onlookers.

Foreign dignitaries and heads of state are welcome to attend but by tradition don't receive a specific invitation, Lombardi said.

On Saturday, Francis will give an audience to the media. He will probably hold Mass on Sunday, then deliver the traditional Angelus, one of the most common Catholic prayers, the spokesman said.

Palm Sunday is just a week later, and the new pontiff will be busy, as it is the holiday that kicks off Holy Week, which culminates in Easter celebrations.

The Rev. Thomas Rosica, a Vatican spokesman, said that Francis was making his own mark as the 266th pope -- and shaking things up a little.

As head of the church, the Argentine is following the same path he took during his years as archbishop in Buenos Aires, he told CNN.

"He was a pastor there, very close to the people, and he's continued that -- he's simply changed the color of his robes right now, and the world is paying attention to every move, every word, every gesture," Rosica said.

"Those of us who were used to him in Buenos Aires are not at all surprised with this, but I can tell you that it does send some jolts through the system here, which is so deeply rooted in tradition and beautiful ceremonies and following the Book.

"Pope Francis is telling us that the Book is very important, but there's even something more important: Be faithful, be close to the people, smile and take things as they come."

Rosica said the media's focus on the scandals surrounding the church missed the point of why Francis was elected as pope.

"They chose someone who has an extraordinary record for compassion, for relating to people not just within the Catholic Church ... but those on the fringes, the poor, the destitute, the disenfranchised, those living in irregular relationships, those who have suffered, those who have brought suffering upon themselves."

Francis set the tone for his vision of the church's future in his first Mass as pope Thursday, held in the Sistine Chapel with the cardinals who participated in the conclave.

With solemnity, he delivered a short, unscripted homily about moving the Catholic Church forward, saying its leaders must put faith at the heart of what they do -- or risk it becoming nothing more than a charity.

"We can walk as much as we want, we can build many things, but if we do not profess Jesus Christ, things go wrong. We may become a charitable NGO, but not the church, the bride of the Lord," he said.

"When we are not walking, we stop moving. When we are not building on the stones, what happens? The same thing that happens to children on the beach when they build sandcastles: Everything is swept away, there is no solidity."

After the Mass, the seals were ceremonially removed from the doors of the papal apartment at the Vatican, although renovation work must be done before Francis moves in. The apartment was sealed after Benedict XVI's departure two weeks ago.

When Jorge Bergoglio stepped onto the balcony at the Vatican on Wednesday evening to reveal himself as the new leader of the world's 1.2 billion Catholics, he made history as the first non-European pope of the modern era, the first from Latin America, the first Jesuit and the first to assume the name Francis.

He takes charge of a global flock at a time when confidence in the church has been dented by revelations of sex scandals and corruption claims.

A group representing the alleged victims of sexual abuse by priests wrote an open letter Francis on Thursday, requesting a meeting.

"Your predecessor met only a few times with a few carefully chosen victims in tightly choreographed settings, as he visited nations where this crisis had reached a fever pitch," the letter from the Survivors Network of those Abused by Priests states.

"We write today seeking a different kind of meeting -- one in which our respective organizations -- yours, huge and struggling, and ours, small and struggling -- can begin to work together to safeguard children across the globe."

Before the conclave, the group had published a list of potential pontiffs who they felt might sweep their concerns under the rug, as well as a list of candidates they believed would lend an open ear to their concerns. Pope Francis was on neither list.

The 76-year-old is the first pope to take the name Francis. He does so in honor of St. Francis of Assisi, revered among Catholics for his work with the poor.

He brings together the first and the developing worlds. Latin America is home to 480 million Catholics -- around 40 percent of all those in the world.

The pontiff is seen as a conservative in doctrinal matters, as was his predecessor. As a cardinal, he clashed with the government of Argentine President Cristina Fernandez de Kirchner over his opposition to gay marriage and free distribution of contraceptives.

However, Francis' first public appearance as pope -- when he appealed for the crowds to pray for him before he gave a blessing -- suggested a "different pastoral style" from that of Benedict, who took a more academic approach, said Lombardi, the Vatican spokesman.

Francis stood, rather than sitting on a throne, to receive the oath of allegiance from his fellow cardinals after his election, and for his appearance on the balcony wore just a white cassock and a simple cross, Lombardi said.

Also, on the ride back from the Sistine Chapel to the Santa Marta residence, he declined the papal car that had been prepared for him and instead took the bus with other cardinals, Lombardi said.

In Buenos Aires, Francis chose to live in an apartment rather than the archbishop's palace, passed on a chauffeured limousine, took the bus to work and cooked his own meals.

As a Jesuit, Francis is a member of the Society of Jesus, one of the biggest and most important orders in the church.

Jesuits are recognized for their exceptional educational institutions and focus on social justice.

They have a reputation for avoiding positions of power.