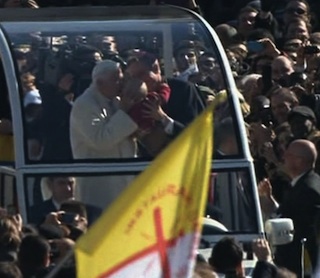 ROME (CNN) -- With the dust still settling from Benedict XVI's historic resignation as pope, the focus in Rome turns to the future Friday as Roman Catholic cardinals prepare to meet to discuss a timetable for picking the new pontiff.

A letter issued by the dean of the College of Cardinals on Friday calls the cardinals to come together Monday morning for the first in a series of meetings, known as general congregations.

There will be a second session Monday afternoon, according to the letter from Cardinal Angelo Sodano.

The cardinals' first task is likely to be setting a date for the secret election, or conclave, in which they will pick Benedict's successor.

They will also hold important discussions on the future direction of the church, which has been beset by scandal in recent years, and the kind of leader they want to see at the helm.

All the cardinals attend the general congregations, but only cardinals who are younger than 80 are eligible to vote for the new pope in the conclave.

Benedict, meanwhile, has embarked on the first day of his new life of seclusion.

With the world's media watching, he left Vatican City on Thursday for the last time as pope.

His final public words were given to about 10,000 people who had gathered at Castel Gandolfo, the papal summer home outside Rome, to bid him an emotional farewell.

"I am no longer the pope, but I am still in the church. I'm just a pilgrim who is starting the last part of his pilgrimage on this earth," he said.

"I would still -- with my heart, with my love, with my prayers, with my reflection and with all my inner strength -- like to work for the common good and the good of the church and of humanity."

Benedict, who will now be known as "pontiff emeritus," will spend the next few weeks at the peaceful hilltop Castel Gandolfo residence before moving to a small monastery within the Vatican grounds.

He is the first pope to resign in six centuries, and his departure ushers in a period of great uncertainty for the church as the cardinals work to elect the next pontiff.

Whoever steps into Benedict's red papal shoes will be expected to deal with unresolved questions about alleged corruption, child sex abuse by priests, leaks from inside the Vatican and, most recently, Italian media reports alleging an episode involving gay priests, male prostitutes and blackmail.

On his last day as pope, Benedict made a pledge of "unconditional obedience" and respect to whoever takes up the reins.

His promise came in a final meeting with the cardinals who will pick his successor, almost certainly from within their own ranks.

Vatican officials said Thursday they expect 115 cardinal-electors to take part in the conclave.

Of those, 67 were appointed cardinal by Benedict, suggesting his influence will live on. However, the Vatican has said that he won't interfere in the new pope's running of the church.

The situation of having a living pontiff in retirement is almost unprecedented for the church.