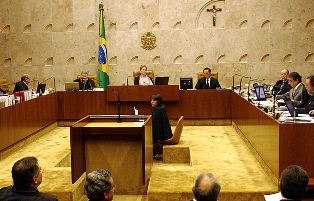 SAO PAULO (AP) -- Brazil's top court has backed sweeping affirmative action programs used in more than 1,000 universities across this nation, which has more blacks than any country outside Africa yet where a severe gap in education equality between races persists.

The Supreme Court voted 7-1 late Thursday to uphold a federal program that has provided scholarships to hundreds of thousands of black and mixed-race students for university studies since 2005. Its constitutionality was challenged by a right of center party, The Democrats. Three justices abstained from the vote.

The court ruled last week in a separate case that it was constitutional for universities to use racial quotas in determining who is admitted.

"If I didn't have the scholarship, I wouldn't be here. It pays my entire tuition," said 22-year-old student Felipe Nunes, taking a break between classes at the privately run Univerisdade Paulista in Sao Paulo.

Nunes, the mixed-race son of a mechanic, said he's the first person in his family to attend university. He's one of 919,000 recipients of a "ProUni" scholarship since 2005. The ProUni program funds studies in private universities for black, mixed race, indigenous and poor students whose primary education was in the public school system.

Education inequality in Brazil is stark despite economic advances that have seen 20 million people pulled from poverty since 2003. A woeful public education system is considered a weak link as Brazil tries to build on recent economic gains and become a global powerhouse.

There are shortages of trained labor in several key areas, such as engineers to help the nation develop its massive offshore oil reserves, the biggest finds in the Western hemisphere in three decades. Supporters of affirmative action say it will help the country fully tap into the potential of Brazil's entire population.

While those figures show the gap between whites and other races in Brazil has actually widened, supporters say the gain in the percentage of nonwhites getting a university education is the more important statistic.

Backers say the use of scholarships, quotas and other policies aimed at getting more blacks and mixed-race Brazilians into universities is needed to right the historic wrongs of slavery, centuries of stark economic inequality and a society in which whites are overwhelmingly in leadership roles in government and business, despite Brazil having more citizens of African ancestry than any nation other than Nigeria. Fifty-one percent of Brazil's 192 million people are black or of mixed-race,

"If you're going to write about discrimination against blacks you have to talk about the privileges whites enjoy. Those privileges are what's at stake in the intensely emotional opposition to these policies," said Eliza Larkin Nascimento, director of the Institute of Afro-Brazilian Research and Study in Rio de Janeiro. "They feel threatened. Their privileges are sustained by a system that perpetuates inequality, both in the form of extreme poverty and extreme privilege."

Opponents say the idea of quotas is itself racist and that Brazil has no need for them, arguing there is little social tension among the races and the nation lacks the overt racism seen in many other nations.

"Racial policy, even in good faith, is state therapy for a disease that does not exist: We don't have a racial identity," Jose Ferreira Militao, a black activist and lawyer in Sao Paulo, wrote recently in the Estado de S. Paulo newspaper.

He argued that what's needed are policies aimed at social - not racial - problems in Brazil, programs that use economic need as the criteria for university spots and scholarships. That, he said, would assist black and mixed-race Brazilians, who comprise 70 percent of the poorest 10 percent of the nation.

Brazil's Supreme Court justices strongly voiced opinions that affirmative action is the best means of combatting inequality that has lingered for centuries.

"From this decision onward, Brazil has one more reason to look in the mirror of history and not blush with shame," Supreme Court Justice Carlos Britto said after last week's 10-0 vote supporting racial quotas.

His colleague Carmen Lucia Rocha added: "It's better to have a society in which everyone is free to be whatever they want. Quotas are one step in a society where this doesn't naturally occur."

The Supreme Court is also expected to rule soon on a motion filed in 2009 by a white student who argues that although he scored high on his college entrance exam for the Federal University of Rio Grande do Sul, his spot was taken by a student who scored lower but was admitted based on a racial quota.

Norma Odara, a 20-year-old journalism student at Mackenzie University in Sao Paulo, considers herself black, though her mother is white, and her youthful face embodies Brazil's mixed heritage.

She's not the recipient of any government scholarship and her university does not use any sort of quota system, something made clear by the fact Odara was one of the few black students in a sea of whites on Mackenzie's leafy campus. Still, Odara said quotas and other such programs are only temporary fixes, and that what is needed is more government spending in public grade schools where most black Brazilians study, so that they are better prepared to enter universities on academic merit alone.

"The quotas are palliative, they're only trying to momentarily resolve the problem," she said. "What's not being treated are the root ailments."