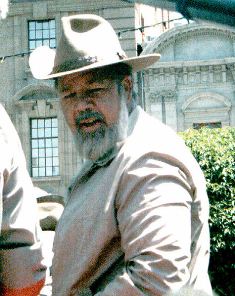 JOHANNESBURG, South Africa (AP) -- Lawyers in South Africa's heartland quietly wrapped up arguments Thursday in the murder of a white supremacist, a case that has illustrated how far South Africa has moved from apartheid.

Scuffles had broken out between black and white protesters outside court during early appearances by the two black farmworkers accused of beating 69-year-old Eugene Terreblanche to death with an iron rod at his farm near Ventersdorp, about 100 kilometers (60 miles) west of Johannesburg in April, 2010.

No protesters came to court Thursday as lawyers completed their closing arguments. Emotions have calmed. And by the time he died, Terreblanche's prominence had faded considerably from the days when he could sit down with top politicians and capture international headlines with his doomsday rhetoric, vaguely Nazi regalia, and occasional forays into violence.

The trial began last October. The verdict is expected May 22.

Police have described Terreblanche's murder as the climax of an alcohol-fueled dispute over unpaid wages. But during the trial, defense lawyers alleged the farmworkers had been abused by Terreblanche and acted in self defense.

"It is generally acknowledged that the black population of Ventersdorp lived in fear of the deceased," defense lawyer Norman Arendse said in his closing arguments.

Terreblanche had been jailed in 1997, sentenced to six years for the attempted murder of a black security guard and assaulting a black gas station worker.

Prosecutors rejected allegations that suspect Chris Mahlangu had been sexually abused by Terreblanche. The defense attorneys say their case was weakened by poor police work. A substance believed to have been semen that witnesses reported seeing on Terreblanche's body apparently was not preserved as evidence.

The younger suspect, who turns 18 this week, cannot be named because of his age. His lawyer, Arendse, said during his closing arguments that the case against him was weak.

Mthunzi Mhaga, spokesman for the prosecution, acknowledged that "it would be a challenge to get a murder conviction against" the younger suspect.

Terreblanche co-founded the Afrikaner Resistance Movement, known by its Afrikaans initials as the AWB, to seek an all-white republic within South Africa. He was born and died in the farming community of Ventersdorp. Today, Ventersdorp's white minority lives in comfortable farmhouses or homes in a town dominated by a Dutch Reformed church built at the end of the 19th century. Most blacks live in Ventersdorp's crowded, impoverished Tshing township.

The democratic government has struggled to close the economic divide created by apartheid, which for generations denied blacks political rights and educational and economic opportunity. Arendse said during his closing arguments that both defendants were illiterate.

In 1991, Terreblanche led hundreds of khaki-clad militants waving flags with swastika-like symbols in clashes with police after the extremists tried to stop a speech in Ventersdorp by then-President F.W. de Klerk. Terreblanche saw de Klerk as a traitor because he was negotiating with the African National Congress to end apartheid. Three extremists were killed in the Battle of Ventersdorp.

Terreblanche was at the pinnacle of his political influence two years earlier, when he and another prominent white separatist met with de Klerk.

There were scattered attacks by white extremists in the waning days of apartheid, but never the "holy war" Terreblanche threatened. His AWB's claims to being a military force were undermined by the sight, televised around the world, of three members pleading for mercy from and then being killed by black police in the Bophuthatswana homeland in 1994.

Bophuthatswana's leader was facing civil unrest and the AWB had stormed in to help prop up what the group saw as a pillar of their segregationist ideal. Homeland police accused AWB militants of killing nine black residents before retreating in bloody disgrace.

In 1993, Terreblanche and a retired army general, Constand Viljoen, led extremists who briefly took over the site of black-white political talks. The negotiations went on, resulting in South Africa's first all-race elections in 1994. By then, Viljoen had formed a party, the Freedom Front, that contested the elections and pledged to represent whites in a new South Africa. Today's Freedom Front leader, Piet Mulder, is deputy agriculture minister in the ANC-led government.