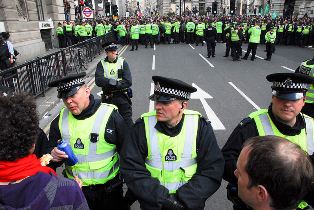 LONDON (AP) -- London's Metropolitan Police Service "graded" reporters on their coverage of the agency, a senior crime journalist for The Sun tabloid said Thursday. The claim was denied by the officials involved.

Crime Editor Mike Sullivan told a judge-led inquiry into Britain's media ethics that he had been told "that there is a system whereby reporters are graded in terms of whether they are favorable to the Met Police or not."

Sullivan's testimony could not be verified. He didn't name the source for his information, and a spokeswoman for the Metropolitan police service, sometimes abbreviated to MPS, said his allegation didn't appear to be true.

"The MPS has no such system," she said, speaking anonymously in line with force policy. "As far as we're aware, there has never been a grading system of this type."

Sullivan, who was arrested earlier this year as part of a police investigation into bribery, insisted that he had been reliably informed "perhaps three or four years ago, could be five years ago, that there was such a system."

"I don't know how they do that, on what basis they make their judgment," he said. "I don't suggest it's a 'top 20' (that ranks) ... who is going to be more favorable to the Met than others, but I was told that system existed and I quite believe it."

The media ethics inquiry Sullivan was testifying before is investigating the practices of Britain's scandal-tarred press. Set up after phone hacking revelations that forced the closure of Rupert Murdoch's News of the World tabloid, it is currently weighing the relationship between the media and British police.

Previous hearings have heard of cozy ties between senior officers and top editors, with expensive dinners at fancy restaurants and chummy drinks at a wine bar across from Scotland Yard's central London offices.

The links between the press and police - and belief that some organizations received preferential treatment - are regarded as important because initial investigations failed to expose the extent to which tabloids had illicitly intercepted the voice mail messages of those in the public eye.

Sullivan insisted Thursday those events were a thing of the past.

"There's been a lot of mention in this inquiry about long lunches and journalists entertaining lavishly, bottles of champagne," he said. "My experience is that lunching and buying dinners have become an increasing rarity over the last few years, and that was really perhaps as Fleet Street sobered up, or perhaps as the police became more professional with alcohol taken during working hours."

In a separate development, the News of the World's former chief reporter denied allegations that he'd tried to intimidate a witness in the scandal. Neville Thurlbeck, 50, says in a blog post the allegations "seem extremely far-fetched to me." He says he vigorously denies all wrongdoing in the long-running scandal.

Earlier this week, six other suspects were arrested, including former News International executive Rebekah Brooks and her husband Charlie.

Raphael Satter can be reached at: http://twitter.com/razhael