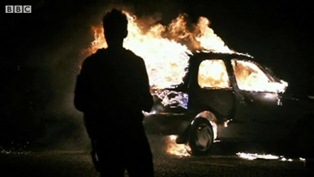 LONDON (AP) -- Britain will roll out programs pioneered in the United States to tackle gang violence as part of the country's response to summer riots in which hundreds of young people committed arson, looting and attacks on police officers, the government said Tuesday.

Though a government report released last week showed that fewer than one in 10 people arrested for riot-linked crimes were gang members, Britain's Home Secretary Theresa May said 10 million pounds ($16 million) would be used to guide young people away from crime in 30 of the country's worst affected areas.

In the immediate aftermath of the unrest, Prime Minister David Cameron had blamed "opportunist thugs in gangs" for coordinating the violence and looting during the August riots that raged over four nights across England. He asked May and other ministers to work on a new strategy for tackling gangs.

Last week's report showed police believe gangs "did not play a pivotal role" in the unrest, but ministers say a new strategy is needed to help young people at risk.

"We need to change the life stories of young people currently ending up dead or wounded on our streets or locked in a cycle of re-offending," May told lawmakers.

U.S. experts point to the success of public meetings in which police, probation workers, welfare providers and community residents confront gang members, including those yet to be convicted of any crime, and warn of a tough line - while offering help with healthcare and employment for those who turn their backs on violence.

The approach has been credited with delivering sharp drops in gang-related killings in Boston, Chicago and Cincinnati.

Welfare Secretary Iain Duncan Smith said the fact that gangs did not organize the riots should not "distract us from the disproportionate and devastating impact they have on some of our most deprived communities."

A national study by the Home Office has estimated that about 6 percent of all boys and girls aged 10 to 19 - or around 50,000 people - are members of gangs.

Britain has already pledged to work with 120,000 of the country's most troubled families, aiming to ensure they and their children are steered away from a life of crime.

May said a 100-strong team of advisers would work to roll out U.S. methods, and vowed that police, health officials and youth workers would do more to intervene in the lives of young people judged to be at risk of turning to crime.

She suggested social workers may be attached to hospital emergency rooms, to be on hand to work with young people who suffer knife wounds, or other common gang-related injuries.

May also said Britain will spend 1.2 million pounds ($2 million) to help young woman she said are increasingly becoming the victims of gang-related rapes.

Women who are the partners of gang members are being sexually assaulted by those allied with rival gangs, she said.