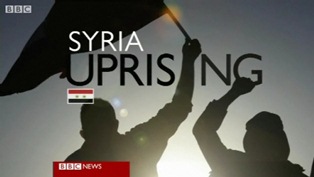 BEIRUT (AP) -- Inspired by the scenes of euphoria in Libya, Syrian protesters poured into the streets Friday and shouted that President Bashar Assad's regime will be the next to unravel now that ousted Libyan dictator Moammar Gadhafi is dead.

Syrian forces fired on protesters Friday, killing at least 24 people, activists said, most of them in the central city of Homs, a hotbed of dissent.

"Gadhafi is gone, your turn is coming, Bashar," protesters shouted on Friday in the central city of Hama, long a hotbed of resistance to the regime.

The Syrian uprising has proved remarkably resilient over the past seven months, but has shown some signs of stalling in recent weeks as the government forges ahead with a bloody crackdown that the U.N. estimates has killed more than 3,000 people.

Although the mass demonstrations in Syria have shaken one of the most authoritarian regimes in the Middle East, the opposition has made no major gains in recent months, it holds no territory and has no clear leadership.

Now the armed uprising in Libya that drove Gadhafi from power - albeit with NATO air support - appears to have breathed new life into the Syrian revolt.

"Our souls, our blood we sacrifice for you, Libya!" Syrian protesters chanted Friday.

Others held signs linking Assad's fate to those of other deposed Arab leaders. Tunisia's Zine El Abidine Ben Ali has been driven into exile, and Egypt's Hosni Mubarak is in jail and facing charges of complicity in the deaths of more than 800 protesters in his country's uprising.

Gadhafi's death Thursday, after he was dragged from hiding in a drainage pipe, begging for his life, decisively ended the nearly 42-year regime that had turned the oil-rich country into an international pariah and his own personal fiefdom.

In many ways, the Syrian uprising has taken cues from the Libyans recently.

Syria's opposition formed a national council like the Libyans' National Transitional Council, hoping they could forge a united front against Assad that Syrians and the international community could rally behind.

And with the successes of armed Libyan revolutionaries present in their minds, many Syrian protesters say they are starting to see the limits of a peaceful movement, particularly when compared to the armed uprising in Libya. Some Syrians are now calling on protesters to take up arms and inviting foreign military action, hoisting signs that say "Where is NATO?" and urging the world to come to Syria's aid.

For the most part, Syrian opposition leaders have opposed foreign intervention.

There is no central call to arms by the opposition, in part because there is no clear leadership in the movement.

The Syrian opposition is disparate and fragmented, with various parties vying for power as they seek an end to more than 40 years of iron rule by Assad and his late father, Hafez.

There have been some clashes in border regions between Syrian forces and apparent defectors from the military, but they have not been widespread.

Still, the growing signs of armed resistance may accelerate the cycle of violence gripping the country by giving the government a pretext to use even greater firepower against its opponents. Authorities have already used tanks, snipers and gangster-like gunmen known as "shabiha" who operate as hired guns for the regime.

The regime has sealed off the country and prevented independent media coverage, making it difficult to verify events on the ground.

The Local Coordination Committees, a Syrian activist network, put Friday's death toll at 24 nationwide. It said 19 of those killed died in the flashpoint city of Homs, where military operations in pursuit of activists and anti-government protesters are a daily occurrence. The LCC said three others were killed in Hama and its suburbs, one in the northern Idlib province and one in the Damascus suburb of Saqba.

The Syrian Observatory for Human Rights, an activist group based in Britain, said at least 15 people were killed in Homs and reported heavy fighting in Saqba, near Damascus, between troops and gunmen thought to be army defectors.

In the Syrian town of Qusair near the Lebanese border, Syrian forces closed all mosques to prevent people from gathering. The weekly protests usually begin as Syrians pour out of mosques following Friday afternoon prayers. "Gadhafi's death will boost the morale of Syrians," Osso told the AP in a telephone interview. "It will make them continue until they bring down the regime."

(This version CORRECTS that at least 15 were killed in Homs, not Hama).)