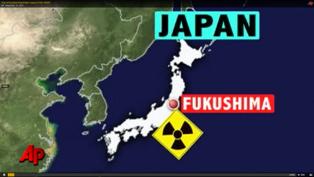 FUTABA, Japan (AP) -- Japan officially sealed off a wide area around a crippled nuclear power plant early Friday to stop tens of thousands of residents from sneaking back to the homes they quickly fled and are enduring a long, uncertain wait to return.

Fearing they might not see their homes and belongings again for at least six months, evacuees raced into the deserted towns Thursday before the ban took effect to grab whatever belongings they could cram into their cars.

"This is our last chance, but we aren't going to stay long. We are just getting what we need and getting out," said Kiyoshi Kitajima, an X-ray technician, who dashed to his hospital in Futaba, a town next-door to the plant, to collect equipment before the order took effect at midnight.

Nearly 80,000 people were hurriedly evacuated from a 12-mile (20-kilometer) zone around the Fukushima Dai-ichi plant on March 12, after an earthquake and a tsunami destroyed its power and cooling systems. The evacuation order had no teeth, and people began increasingly returning to check on the remains of their lives. Some had stayed all along.

With ongoing concerns about radiation exposure - as well as theft in the mainly deserted zone - the government said as of midnight Thursday the residents would be formally barred from entering the area.

Under a special nuclear emergency law, people who enter the zone will be subject to fines of up to 100,000 yen ($1,200) or possible detention of up to 30 days. Up to now, defiance of the evacuation order was not punishable by law, and the police manning the roadblocks had no authority to stop people from entering.

"We beg the understanding of residents. We really want residents not to enter the areas," Chief Cabinet Secretary Yukio Edano told reporters.

The order angered some residents who had fled nearly empty-handed when told to evacuate.

"I initially thought we would be able to return within a few days. So I brought nothing except a bank card," said Kazuko Suzuki, 49, of Futaba.

"I really want to go back. I want to check if our house is still there," said Suzuki, who fled with her teenage son and daughter. "My patience has run out. I just want to go home."

With the deadline approaching, evacuees ventured into the no-go zone, some in white protective suits and others in face masks and rain gear they hoped would protect against radiation. Most raced through the zone with car windows closed, their vehicles stuffed with clothing and valuables.

While the levels of radioactivity in the evacuated area have been quite low, the government wants to keep people away out of concerns that long-term exposure can be dangerous.

As of Thursday night, about 40 people stayed, many of them dairy farmers refusing to leave their cattle and elderly people who cannot move, the government said. Local officials were working to persuade them to leave, rather than punishing them, according to Kenji Kawasaki of Japan's Nuclear and Industrial Safety Agency.

The no-go order was not issued because of any particular change in plant conditions, which appear to have somewhat stabilized. Even under the best-case scenario, however, the plant's operator says it will take six to nine months to bring its reactors safely into a cold shutdown.

In a visit to the region, Prime Minister Naoto Kan said the government would do everything possible to speed up the timetable of shutting down the reactors. Kan also gave a pep talk to workers at a nuclear crisis management center in Fukushima.

Edano said one person per household would be allowed to return by bus for a maximum of two hours to collect necessary belongings and would be screened for radiation afterward.

Residents chafed at the one-person limit.

Details were still being worked out, and Edano said he hoped each family would be able to make the trip within the next month or two. When the situation stabilizes, families will be allowed further visits, he said.

No visits will be allowed in the two-mile (three-kilometer) area closest to the plant, said Hidehiko Nishiyama of NISA.

Katsunobu Sakurai, mayor of Minami Soma, where about half the 71,000 residents lived in areas that will now be off-limits, questioned the rationale for how the evacuation zone was decided.

"It feels like some outsider who doesn't know anything about our geography sat at a desk and drew these circles," Sakurai said. "The zones have zero scientific basis. Radiation doesn't travel in neat circles. Just putting up circles around the plant is unreasonable."

Fukushima's governor, who has been critical of the government's performance, said he urged Kan to ensure the disaster and related compensation issues are handled properly.

"I told the prime minister that I strongly hope that evacuees can return home as early as possible," said the governor, Yuhei Sato.

Meanwhile, new police data Thursday showed that at least 65 percent of the 11,108 identified victims from the earthquake and tsunami were aged 60 or older and almost all of them had drowned. Another 1,899 victims were of unknown age.

Adding those still missing, the twin disasters killed an estimated 27,500 people. The police agency said nearly 93 percent of the confirmed victims had drowned. Others perished in fires, were crushed to death or died from other causes.

The northeastern coast hardest hit by the disasters had a high concentration of elderly residents.