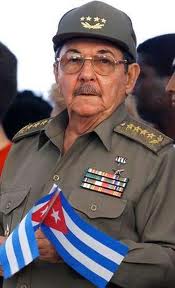 HAVANA (AP) -- Raul Castro was named first secretary of Cuba's Communist Party on Tuesday, with his aging brother Fidel not included in the leadership for the first time since the party's creation 46 years ago.

Despite raising hopes during the gathering that a new generation of leaders was poised to take up important positions, the island's president announced that Jose Ramon Machado Ventura, an 80-year-old longtime confidante, would be his No. 2.

Ramiro Valdes, a 78-year-old vice president, was named to the No. 3 spot. Several younger politicians were added to the 15-member leadership group, but in lesser positions.

Fidel Castro made a surprise appearance at the gathering, receiving thunderous applause from the 1,000 delegates assembled in a vast convention center in the capital, Havana.

Many could be seen crying as the man who led the 1959 revolution to overthrew Fulgencio Batista was helped to his place on stage by a young aide, then stood at attention next to his brother during the playing of Cuba's national anthem.

While Fidel has appeared in public many times since improved health allowed him to re-emerge from seclusion last summer, he has rarely been seen alongside his brother.

The revolutionary icon, who wore a blue track suit over a checked shirt, looked unsteady on his feet as he clutched the aide's arm, and at times slumped in his chair. But he became more animated as the proceedings continued, especially when Raul's name was read out by a party official announcing the members of the party's Central Committee.

That larger group is tasked with picking the leadership council. For the first time since the party's founding in 1965, Fidel was not included. He had revealed in March that he left the party's top post when he fell gravely ill in 2006, and had never returned despite the fact he continued to be listed as leader.

As their names were called for membership in the Central Committee, each newly elected official stood up, revealing a mix of young and old, including many women and Cubans of African descent. There were also a number of generals and other senior armed forces officials.

Three relatively young people were elected to the more important leadership council, including Marino Murillo, a 50-year-old former economy minister who was recently promoted to a position that puts him in charge of implementing sweeping economic reforms. The current economy minister, Adel Izquierdo, was also named to the council, as was Lazara Mercedes Lopez Acea, the Communist Party chief in Havana.

The Congress also approved 300 economic proposals, though details have still not emerged. Apparently included in the measures was a recommendation to legalize the buying and selling of private property, which has been heavily restricted since the revolution.

Also on the table was a proposal to eventually eliminate the monthly ration book, which provides Cubans with a basic basket of heavily subsidized food and other goods. Other measures envision providing seed capital for would-be entrepreneurs and eliminating the island's unique dual-currency system.

Among those who voted in favor was Fidel Castro, who along with his brother was named a delegate to the Congress.

The Party Congress does not have the power to enact the changes into law, but the suggestions are expected to be acted upon quickly by the National Assembly over the coming days and weeks.

Officials called the gathering to set a new course for Cuba's economy, and there had also been talk of the need to rejuvenate an aging political class composed largely of octogenarians in power from the early days of the revolution.

In a speech opening the Congress this weekend, Raul warned that a new generation was needed to take over when the old guard is gone.

He even proposed term limits for officials including the president - a taboo subject during the half-century in which Cuba has been ruled by either him or his brother. The goal is to create opportunities for younger politicians so they can gain experience, Raul said.

The inclusion of so many well-worn names in the leadership council came despite an opinion piece by Fidel Castro in which the former leader implied that they were only included on a list of candidates as a gesture toward their years of service.

"There were some colleagues who, because of their years and poor health, can no longer do service to the Party, but Raul thought it would be very tough on them to exclude them from the list of candidates," Fidel wrote in a column that appeared in state-run newspapers and websites Tuesday.

He added that he was all for the term-limit proposal made by Raul, despite the fact that he himself ruled the island for more than 47 years.

"I like the idea," Fidel wrote. "It is a subject on which I have long meditated."

The revolutionary icon says that while in power, "I must confess I was never very worried about how long I exercised the role of president ... and first secretary of the party."

Fidel said his brother had shown him his proposals days before sharing them with the Congress, an apparent effort to counter any rumors that the two men disagreed.

"He shared (the report) with me several days ago on his own initiative, just as he has with many other subjects without my asking him," Fidel wrote.