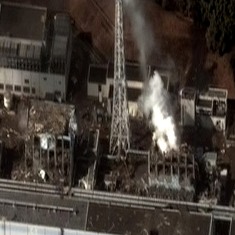 TOKYO (AP) -- The crisis at Japan's tsunami-crippled nuclear plant forced Kazuko Suzuki to flee her home without packing, ended her job at a welfare office and cost her 18-year-old son an offer for work of his own.

The plant operator's announcement Friday that it would pay $12,000 in initial compensation to each evacuated household struck her as far too little to repay her family for the economic turmoil it has already suffered.

"I'm not satisfied," said the 49-year-old single mother from Futaba, who has lived for the past month with her two teenage sons at a shelter in a high school north of Tokyo. "I feel like this is just a way to take care of this quickly."

Suzuki is among tens of thousands forced to leave their homes because of radiation leaking from the Fukushima Dai-ichi nuclear plant, unsure of when, if ever, they will be able to return. The complex's cooling systems were disabled by the March 11 tsunami, which was spawned by a magnitude 9.0 earthquake.

Some have traveled hundreds of miles (kilometers) to Tokyo Electric Power Co.'s headquarters in the capital to press their demands for compensation. Pressed by the government as well, TEPCO announced it would begin distributing money April 28.

"We have decided to pay provisional compensation to provide a little help for the people (who were affected)," TEPCO President Masataka Shimizu told a news conference.

Roughly 48,000 households living within about 20 miles (30 kilometers) of the crippled plant would be eligible for the initial payments - 1 million yen (about $12,000) for families and 750,000 yen (about $9,000) for single adults, the government said. The government said more was expected to be paid later.

TEPCO expects to pay 50 billion yen (about $600 million) in the initial round of compensation. As costs mount for the utility, Shimizu said the company would consider cutting executive salaries as well as a number of its employees.

Suzuki said the evacuation has placed a serious financial burden on her family, forcing it to buy clothes, food and other basics.

"We've had to spend money on so many extra things, and we don't know how long this could go on," she said.

Akemi Osumi, a 48-year-old mother of three also from Futaba, said the money was a "small step" but that it didn't fairly compensate larger families. Her family is living at the same shelter but also must rent an apartment for her eldest son to go to a vocational school.

"One million yen doesn't go very far," she said. "I'm not convinced at just 1 million yen per family. If it was dependent on the size of the family I'd understand, but it's not."

In the small fishing town of Namie, about six miles (10 kilometers) from the plant, store owner Masami Watanabe hurriedly inspected his shop while scores of police searched the evacuated area for bodies of those slain by the tsunami.

Watanabe, who received special permission from the government to return for a quick survey of his shop, was also critical of TEPCO's offer.

"There is no way they can compensate us for what happened here. What they are offering isn't enough. I have a mortgage to pay. And besides, it's not all about money," he said.

Watanabe rented an apartment in the northeastern city of Sendai after the evacuation, but wants to move back home.

"Who knows how long that will take," he said, as he put a garbage can in front of his shop doorway to keep burglars out.

TEPCO is still struggling to stabilize the nuclear plant and restore cooling systems that failed after the tsunami wrecked emergency backup systems as well as much of the plant's regular equipment.

Radiation leaks from the crisis have contaminated crops and left fishermen in the region unable to sell their catches, a huge blow to an area heavily dependent on fishing and farming.

The governor of Fukushima, Yuhei Sato, has vigorously criticized both TEPCO and the government for their handling of the disaster, demanding faster action.

"This is just a beginning. The accident has not ended. We will continue to ask the government and TEPCO to fully compensate evacuees," he said.

Japan's nuclear compensation law exempts the operator from liability when the accidents are "caused by a grave natural disaster of an exceptional character, or by an insurrection." However, it would be politically untenable for TEPCO to cite the tsunami as a rationale for not paying damages, given the complex nature of the problems that have unfolded at the plant, and questions over its preparedness, among other issues.

It is unclear whether TEPCO is likely to face lawsuits going forward. Most Japanese prefer to avoid the cost and publicity of going to the courts for redress, and the country relies heavily on nonjudicial resolution of disputes.

With Tokyo still suffering a power crunch because of the loss of power generated by its stricken plants, TEPCO said it planned to install gas turbines at two thermal power plants to boost output.

TEPCO, the main power supplier to the Tokyo region, said the new turbines would raise its capacity to between 50 million and 52 million kilowatts, still well below the nearly 60 million kilowatts of power consumed during peak hot weather days last summer.

The company earlier said it would only be able to provide 46 million kilowatts of capacity.