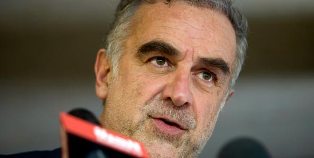 It's the "O" factor. Obama, Ocampo, Odinga - they all share the distinctive first letter of members of the Luo tribe in Kenya, and some in this East African nation believe that the three are brothers in a conspiracy to see six suspects convicted at Ocampo's Hague-based court so that Odinga can become president in the land where Obama's father was born.

Though the conspiracy is fanciful, it has traction among those who believe the ICC suspects, who are charged with orchestrating Kenya's 2007-08 postelection violence, are being unfairly prosecuted. Analysts warn that if such stereotypes are allowed to gain momentum, the chances of tribe-on-tribe violence rises.

"Obama's father was a Luo and he (President Obama) wants his fellow tribesman Odinga to become president, so he has bribed Ocampo to prosecute Kenyatta so that Odinga can lead," Susan Njoki, a 45-year-old food seller, told The Associated Press during a rally convened on Monday by Kenya and Ruto. Njoki also spoke at the rally that the two men held after returning from a preliminary hearing at The Hague.

Even some of the more educated believe it.

"There is a relationship between Obama, Odinga and Ocampo. Obama wants to install Odinga next year so that America can get business opportunities they lost to China, Malaysia and countries of the Far East," said Njuguna Ndungu, 36, a high school teacher. "The Americans don't want a leader who is independent. The leaders who have gone to The Hague are independent-minded."

Observers warn that the "O" conspiracy is an example of tribal stereotypes propagated by Kenyan politicians trying to gain support from members of their tribe against opponents ahead of 2012 elections. If left unchecked, such stereotypes could lead to a repeat of the postelection violence, which killed more than 1,000 people.

On their return from The Hague, Kenyatta's and Ruto's convoy was stoned. Odinga supporters were blamed for doing the stoning.

Harun Ndubi, a human rights lawyer, said the alleged conspiracy is a "scheme" to affect the upcoming election.

John Githongo, a former adviser to President Mwai Kibaki on ethics and governance, said that in the 2007 elections politicians used stereotypes to whip up hatred against Kenyatta's Kikuyu community, and now it is being done against Odinga and his Luo community. Though Odinga and Obama's father are both Luo, Ocampo is Argentinian - not Luo.

Kenya has long been divided along tribal lines. Tribal associations influence such life choices as friends, spouses, employment and who to vote for.

A recent survey by a government commission mandated to unify Kenyans found that two of Kenya's 42 tribes held 40 percent of government jobs.

In late 2007 Kenya was plunged into violence shortly after Kibaki was declared the winner of an election that Odinga supporters said was rigged. At least 600,000 people were forced from their homes. Former U.N. Secretary-General Kofi Annan negotiated a peace deal where Kibaki was named president and Odinga prime minister.

Kenyatta and Ruto, once political enemies, are hinting at forming a political alliance with Vice President Kalonzo Musyoka against Odinga. Ruto fell out with Odinga after the prime minister supported bringing those responsible for the postelection violence to justice.

Opinion polls in Kenya have shown Odinga as the most popular presidential candidate with Kenyatta a distant second, Musyoka third and Ruto fourth.

At rallies before last week's court hearing at The Hague, Ruto and Kenyatta attacked Odinga and painted the ICC as a tool of the West to control Kenya.

"The case here is a political one to determine who will go into the statehouse," Energy Minister Kiraitu Murungi said at a rally in Gatundu, a region full of Kenyatta supporters. "What is going on here is judicial neocolonialism."

In another rally in the outskirts of the capital, Ruto said the ICC trials are meant to give Odinga "a through-pass to the presidency."