Video: Obama to Lay Out His Case on Libya to Nation 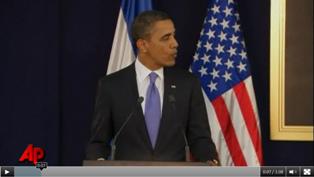 WASHINGTON (AP) -- President Barack Obama will make his case for U.S. involvement in Libya to an anxious public Monday night, while officials offered assurances that military action there does not set a precedent for how the U.S. will handle similar uprisings throughout the Middle East.

White House aides were reluctant to spell out details of Obama's speech, set for 7:30 p.m. EDT Monday. However, deputy national security adviser Denis McDonough said the rationale Obama would lay out for involvement in Libya cannot be applied to escalating clashes between pro- and anti-government forces in Syria and elsewhere.

"Obviously there are certain aspirations that are being voiced by each of these movements, but there's no question that each of them is unique," McDonough said. "We don't get very hung up on this question of precedent."

McDonough sidestepped questions about whether Obama would lay out an exit strategy for U.S. actions in Libya, saying only that Secretary of State Hillary Clinton would discuss those details Tuesday during a key international meeting on Libya in London.

At a separate event in Washington earlier Monday, Obama said the U.S. involvement in Libya would be, "limited, both in time and scope."

The president's remarks to the nation come after the administration scored an important diplomatic victory. NATO ambassadors on Sunday approved a plan for the alliance to assume from the U.S. command all aerial operations, including ground attacks.

That will help Obama assure the nation he can deliver on his promise that the United States will be a partner in the military action against Libya, but not from the driver's seat. Bickering among NATO members delayed the process.

Ahead of Monday's speech, Obama and his top national security officials worked to set the stage for the address - Obama in his weekly radio and Internet address, and Defense Secretary Robert Gates and Clinton with appearances on Sunday television news shows.

But as they made the rounds, neither Clinton nor Gates could say how long the U.S. mission would last or lay out an exit strategy.

"I don't think anybody knows the answer to that," Gates told ABC News' "This Week" when asked pointedly about reports that some officials within the Pentagon believed the mission could last many months.

Clinton was asked on NBC's "Meet the Press" what would be an acceptable outcome given that Obama has both said that Libyan leader Col. Moammar Gadhafi must go and that he is not a military target. Would a partitioning of Libya be a possible solution? "I think it's too soon to predict," she said.

The interviews were conducted Saturday and aired Sunday.

Obama was to address the nation not from the Oval Office, but from the National Defense University in Washington, a Defense Department-funded institution of higher learning for both military and civilian leaders.

The speech comes as leading GOP lawmakers and some from within Obama's own party are pressing him for more clarity about his goals. Obama did not seek congressional authority before he took military action in Libya, nor did he consult closely with congressional leaders, sore points for lawmakers on both sides of the aisle.

Congress wants to know the precise U.S. military role in the days ahead and how a nation strained by two existing wars and mushrooming budget deficits can pay the tab.

"Who knows how long this goes on and, furthermore, who has budgeted for Libya at all?" said Indiana's Sen. Richard Lugar on NBC's "Meet the Press." Added Lugar, the senior Republican on the Senate Foreign Relations Committee: "I don't believe we should be engaged in a Libyan civil war. The fact is we don't have particular ties with anybody in the Libyan picture. It is not a vital interest to the United States."

Gates generally agreed that Libya did not pose a direct threat the U.S. "It was not a vital interest to the United States," he said, while suggesting that what happened there could have implications for democratic movements in other parts of the Middle East where the U.S. does have a more direct stake.

Obama asserted in his weekly address on Saturday that the U.S. mission was "clear and focused," is succeeding, has taken out Gadhafi's air defenses and has saved "the lives of countless citizens" who were threatened by Gadhafi.

On Monday night he will discuss how the mission advanced U.S interests, the White House said. He is also expected to reiterate that U.S. ground forces will not be put into Libya under any circumstance and that the United States will complete the transfer of its lead role to NATO and other partners.

That had always been Obama's plan, but it hit a snag amid feuding among some NATO members last week. Before Sunday's decision, NATO had only agreed to oversee enforcement of the no-fly zone. The new decision extends that authority to protecting from the air Libyan citizens being attacked or pursued on the ground by Gadhafi's forces.

"NATO allies have decided to take on the whole military operation in Libya under the U.N. Security Council resolution," Secretary-General Anders Fogh Rasmussen said in a statement. "NATO will implement all aspects of the U.N. resolution. Nothing more, nothing less," he said.

Amid complaints that he was not consulting enough with Congress, Obama held a teleconference on Friday with a bipartisan group of key members of Congress. During the call, Obama and other U.S. officials emphasized that the U.S. military role would be decreasing.

Polls have generally shown that most Americans support Obama's decision to order the air strikes. A key remaining issue is whether Libya's rebels can gain ground under the protection of Western air support.

Libyan state television reported Sunday that international airstrikes were targeting Gadhafi's hometown and stronghold of Sirte for the first time.

Sen. Carl Levin, D-Mich., chairman of the Senate Armed Services Committee, has scheduled a hearing for Tuesday on the military intervention in Libya. Levin was broadly supportive of the president's steps so far, saying on CNN's "State of the Union" it "has set Gadhafi back. He's on his heels now."

Still, Levin said it was unclear how long the air campaign will have to last if Gadhafi clings to power.

House Speaker John Boehner, R-Ohio, said in a letter to the White House that Obama still must provide a clear and robust assessment of the mission and how it will be achieved.

Former House Speaker Newt Gingrich, eyeing a GOP presidential run, told "Fox News Sunday" that "The goal should be to get rid of Gadhafi. That should be communicated publicly so Gadhafi's forces lose their morale."

Gingrich said he hoped the president, in Monday's speech, "will be dramatically clearer than he has been up until now. I hope the president will say, first of all he is consulting the U.S. Congress, not just the Arab League and United Nations," he said.

Gingrich said he's skeptical that a no-fly zone will work without a mandate to get rid of Gadhafi - even though two weeks ago he called for one.