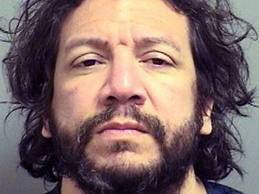 MIAMI (AP) -- Prosecutors said Monday they would seek the death penalty for a Miami couple accused in the slaying of their 10-year-old adopted daughter, who was found dead in the back of her father's pickup truck while her brother sat in the front seat badly burned by chemicals.

Jorge Barahona, dressed in a green suicide watch vest exposing his bare arms, wept as he was led handcuffed into the courtroom. He sat several seats away from his wife, Carmen, who looked composed but frail.

Both have pleaded not guilty to 18 charges including first-degree murder for the death of their adopted daughter Nubia and several aggravated child abuse and neglect charges related to her and her twin brother, Victor.

Authorities said the couple, who became the twins' foster parents in 2004, beat the twins with a shoe, whip or broom, bound their hands and feet, and locked them in a bathroom, sometimes for days. Police believe Nubia was beaten to death Feb. 11. On Valentine's Day, her body was found stuffed in plastic bags and doused in a toxic chemical in the back of Jorge Barahona's truck along the side of a busy highway. He is also charged with mutilating Nubia's body by pouring toxic chemicals on her.

Victor, who survived, was also in the truck, writhing in seizures and suffering from chemical burns.

The Barahonas were also accused of placing a plastic bag over Victor's head to make it difficult for him to breathe and forcing the twins to stand or sit in a corner of a room for hours, according to an indictment handed down last week. Jorge Barahona was charged with punching Victor in the lip, causing permanent disfigurement.

The judge on Monday set a tentative trial date for July.

The Department of Children and Families has also been scrutinized because workers ignored warnings from school officials that the girl was being abused. The couple were the subject of several abuse allegations before Nubia was killed.

A principal and teacher warned in 2007 that Nubia was stealing food, appeared very thin and was afraid of her mother. School officials also said Nubia told them Carmen Barahona hit her. But that information never made it to a child welfare psychologist who told the judge the Barahonas were wonderful foster parents and recommended they be allowed to adopt the twins.

Joanne Muniz, whose son was Nubia's classmate, said she came to court Monday to honor Nubia's memory. She described a sweet little girl who loved to give hugs and showed no hint of the gruesome abuse authorities say she and her brother endured.

"You wonder how this child could go to school with a smile on her face and not say anything," Muniz said through tears.