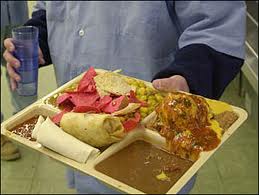 Looking for ways to save money, the state's correction department and Ohio State University are exploring whether to buy food jointly and in bulk.

Sure, not all the dining options of prison and college are identical. Sushi isn't served in the slammer; it is on campus.

But despite the prison grub reputation in popular culture as slop slapped on a plate, food served behind bars and on campuses may not be all that different now.

Tacos, pasta and pizza are dished out in the cafeterias of prisons and the university alike, with some overlapping ingredients even though the recipes probably differ.

That's a menu lineup that stands in contrast to the images in Ohio State senior Ben Wallace's head - though the 23-year-old biology major admits his knowledge of prison meals comes from the movie "The Shawshank Redemption."

"I would just imagine that it's more canned food and stuff that's preserved," said Wallace, of Findlay.

Budget woes have cash-strapped states such as Ohio searching for extra bucks. In Connecticut, the governor has proposed a budget that raises taxes on everything from personal income to haircuts. Florida's governor wants to reduce fees paid to Medicare providers such as hospitals and nursing homes.

Still, inmates and students at one of the nation's largest universities noshing on the same eats?

"But eggs are eggs, milk is milk, bread is bread," she said.

No other states have prisons and universities buying food together or considering such plans, as far as the National Conference of State Legislatures knows.

Ohio State and the prison system are in the early stages of drafting a proposal, so it's unknown which foods they could buy together. But both parties contend that a purchasing partnership wouldn't make the meals less tasty or snacks less savory.

"It'll change how much we spend on it," Hoffman said. "It would not change quality."

That's good news to Wallace, who praised the food from his dining hall days.

"I should have put on the freshman 15, but my metabolism said otherwise," he said. "The food's really good at all of the places."

The partnership idea comes as Ohio faces an estimated $8 billion gap in a two-year budget likely to be around $55 billion.

New Republican Gov. John Kasich wants to sell five state prisons to private operators. He also is proposing to cap university tuition increases at 3.5 percent, leading the schools to look for other ways to shore up money.

The Ohio Department of Rehabilitation and Correction could save $2 million a year by jointly buying its food with Ohio State University and changing its menus, spokesman Carlo LoParo said.

Until the proposal is completed, Hoffman said, it's difficult for the university to know its savings. The school doesn't anticipate slashing food prices as a result of any savings. Any extra dollars would go back into its "academic mission," Hoffman said.

The idea was one of more than 1,000 suggestions made when the prison system asked its staff for ways to save money, LoParo said.

"We thought it was a good idea," he said. "We explored it, and indeed we can."

Currently, the correction department pays another state agency to buy most of its food. But the department and some prisons buy some food directly.

An agreement with the university would help keep costs down, LoParo said, because it would allow all the institutions to buy food as a unit instead of separate entities. That way, they could negotiate a better deal because they're buying bigger quantities for more people.

Although the inmate population of 48,700 is thousands smaller than the student body, the food budget is higher because the audience is, well, captive. The more than 56,000 students at Ohio State's main Columbus campus can ditch university dining for fast food any time.

Food options will be more limited at the prison facilities.

In the wake of department cuts, diced turkey and diced chicken are on the chopping block.

"Our diced entrees were not very popular," LoParo said.

Those dishes would be replaced with cheaper, more-favored entrees, such as rib patties and hamburgers.

Fear not, lovers of the campus' chicken Caesar wraps and Buckeye Bonanza gelato. Ohio State doesn't plan to alter menus because of any partnership.

Kaydee Laney, an 18-year-old Ohio State freshman and fan of the pasta primavera in the dining halls, said she questions whether the inmates should be getting similar meal offerings, such as chicken salad and baked fish.

"The food we get is pretty good," said Laney, of Hicksville. "Do the prisoners deserve to have better food if they are in prison for something that they did wrong?"

"It seems," she said, "like saving money in any way we can would be best."