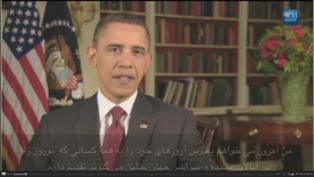 President Barack Obama delivers his annual Nowruz holiday speech this week, directed at the people of Iran and discussing democracy movements in North Africa and the Middle East

And Obama said the U.S. this week will be pulling back from its dominant role in the international campaign aimed at preventing Gadhafi from attacking civilians.

In international attacks early Wednesday, missiles from F-15 fighter jets destroyed Gadhafi missile sites around Tripoli. In two cities where pro-Gadhafi troops have besieged civilians, the international force struck a government ammunition depot outside Misrata and other planes hit ground forces outside Ajdabiya, officials said on condition of anonymity because they were not authorized to release the information.

Obama was asked in an interview with the Spanish-language network Univision if a land invasion would be out of the question in the event air strikes fail to dislodge Gadhafi from power. Obama replied that it was "absolutely" out of the question.

Asked what the exit strategy is, he didn't lay out a vision for ending the international action, but rather said: "The exit strategy will be executed this week in the sense that we will be pulling back from our much more active efforts to shape the environment."

"We'll still be in a support role, we'll still be providing jamming, and intelligence and other assets that are unique to us, but this is an international effort that's designed to accomplish the goals that were set out in the Security Council resolution," Obama said.

Obama had said last week that he had no intention of sending ground combat troops into Libya, and his statements in the interview served to reinforce that point.

As the air war in Libya achieves some of its early objectives, such as grounding Gadhafi's air force, the administration is looking for a quick way out of the front-line role it has assumed in an international operation that has yet to gain the robust participation of Arab nations that Washington wanted.

NATO warships have started patrolling off Libya's coast to enforce the U.N. arms embargo, as the alliance appeared set to assume responsibility for the no-fly zone over Libya to protect civilians.

But civilians in major cities like Misrata are still bearing the burden of clashes with pro-Gadhafi forces, raising the prospect of stalemate and doubt about whether the Libyan leader can be defeated outright.

Obama was returning to Washington on Wednesday a few hours earlier than planned. In El Salvador on Tuesday he painted an optimistic picture of the international military operation and said he had "absolutely no doubt" that control could be shifted from the U.S. to other coalition members within days.

The most obvious candidate to take control - the NATO military alliance, which also happens to be led by the U.S. - has yet to sort out a political agreement to do so. Obama said NATO was meeting to "work out some of the mechanisms."

Meanwhile, the U.S. effort has easily cost hundreds of millions of dollars. Despite the cost and the potential for casualties, Obama said he believes the American public is supportive of such a mission.

"This is something that we can build into our budget. And we're confident that not only can the goals be achieved, but at the end of the day the American people are going to feel satisfied that lives were saved and people were helped," he said.

The Persian Gulf nation of Qatar was expected to start flying air patrols over Libya by this weekend, becoming the first member of the Arab League to participate directly in the military mission. Obama and NATO had insisted from the start on Arab support.

With congressional critics growing more vocal, the president defended the wisdom of the operation so far.

"It is in America's national interests to participate ... because no one has a bigger stake in making sure that there are basic rules of the road that are observed, that there is some semblance of order and justice, particularly in a volatile region that's going through great changes," Obama said.

With longtime autocratic governments under pressure elsewhere in the Arab world, the president made clear his decision to dispatch U.S. planes and ships to intervene in Libya did not automatically signal he would do so everywhere.

The president also suggested the administration would not need to request funding from Congress for the air operations but would pay for them out of money already approved.

Secretary of State Hillary Rodham Clinton said the administration is getting reports - of questionable credibility - that some in Gadhafi's inner circle may be looking for a way out of the crisis. She said some of them, allegedly acting on the Libyan leader's behalf, have reached out to people in Europe and elsewhere to ask, in effect, "How do we get out of this?"

"Some of it is theater," Clinton said in an ABC interview. "Some of it is, you know, kind of, shall we say game playing." She added: "A lot of it is just the way he behaves. It's somewhat unpredictable. But some of it we think is exploring. You know, `What are my options? Where could I go? What could I do?' And we would encourage that."

Several members of Congress, including a number from Obama's own party, were increasingly questioning the wisdom of U.S. involvement.

"We began a military action at the same time that we don't have a clear diplomatic policy, or a clear foreign policy when it comes to what's going on in Libya," said Sen. Jim Webb, D-Va., adding that the Obama administration lacks a clear understanding of rebel forces trying to oust Gadhafi, who has ruled for 42 years.

"Do we know what their intentions would be? Would they be able to govern if they were to succeed? And the answer is we don't really know," Webb said.