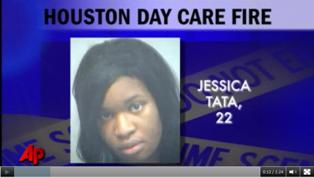 HOUSTON (AP) -- The owner of a Houston home day care where a fire last month killed four children was returned to Texas from Nigeria to face charges early Tuesday.

Jessica Tata was brought to a Houston jail, according to the Harris County Sheriff's Office's website, after spending Monday in the Fulton County Jail in Atlanta.

The 22-year-old day care operator arrived in the United States from Nigeria before dawn Monday, the U.S. Marshals Service said. Tata was taken into custody in Atlanta, then waived extradition to Texas.

Tata was initially taken into custody Saturday in Port Harcourt, Nigeria. Authorities believe she fled to the West African nation two days after the Feb. 24 fire, which also injured three children. Investigators believe Tata went shopping and left all seven children alone before a stove-top burner that was left on ignited the blaze.

Tata has been charged with manslaughter, injury to a child and child abandonment. The manslaughter charge carries a maximum sentence of 20 years in prison.

The U.S. Marshals Service, which headed the search for Tata, said agents with the international police agency Interpol had been in Port Harcourt since Friday and were able to locate Tata based on leads and information from Interpol Washington, the U.S. Department of State Diplomatic Security and other authorities.

Tata had been on the U.S. marshals' list of the 15 most wanted fugitives and the agency had offered a reward of up to $25,000. The agency said it has received some claims for the reward money and it is working through them to determine their validity.