Mardi Gras in New Orleans: One of the Biggest in Years 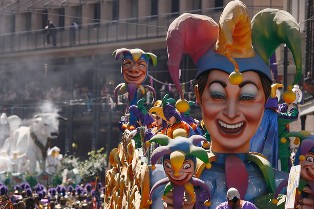 Police on foot, some on horseback, on Wednesday ushered in the Christian season of Lent by clearing Bourbon Street and closing the 2011 Carnival season which has been among the most raucous since Hurricane Katrina, partly because it overlapped with college spring break. The Skanner News Video: Final Rio performance

Tony Anello, 57, operated a daiquiri stand on Bourbon Street, and estimated business was up by at least 10 percent over last year despite gloomy skies, scattered rain drops and threats of severe weather watches for tornadoes and flash floods.

Anello said he briefly quit working for his uncle, who owns one of four daiquiri shops in the French Quarter, because he was disgusted by past crowd's behavior. Though this year's crowd seemed larger than last year, he said the people seemed tamer.

``It's been getting better and better every year,'' he said.

``It's so much fun,'' she said as she headed back to her hotel to check out so she could catch a flight home. ``How could you not come back? It's good food, good music and good people.''

Clarinetist Pete Fountain kicked off Tuesday's parades shortly after dawn with his marching group. The traditionally African-American Krewe of Zulu and the parade of Rex, King of Carnival, followed. New Orleans Mayor Mitch Landrieu led Zulu on horseback before dismounting at the antebellum-columned Gallier Hall for champagne toasts with Mardi Gras royalty.

By afternoon, the party had largely shifted from the family-friendly neighborhoods where the parades start to the packed streets of the French Quarter.

Ashley Scharfenstein, 24, jived to the music at a street party in the Treme neighborhood before strolling off to the French Quarter.

``Wherever the music takes us, we're going,'' said Scharfenstein, who was dressed as a black peacock.

Even the police were having a ``fantastic'' Fat Tuesday with no major incidents reported, said Officer Garry Flot, a New Orleans Police spokesman.

For many, the celebration was ending even before dark after a long day of elation.

Christian Wilkins, a 35-year-old bartender dressed in gold tights and nothing more except his ``Legalize It'' custom-made beads, was among the most depleted.

Completely lost in the maze of streets in the Faubourg Marigny, near the French Quarter, the Baltimore native walked back and forth shouting, ``Oh, God! I am so lost!''

The problem was manifold: he was totally drunk, staying at a friend's house and alone. He held his cell phone in his hand trying to pull his friend's address from the contact list. ``I am so lost it is wicked retarded,'' he said, managing a smile.

Finally, with some help, he found the address. ``I'm so wasted,'' he admitted, before he staggered off to find the place where he could lay his head. ``I got to go.''

Retired hospital executive Pat Kent dressed up as a gun-toting priest. He said he and a friend were going as the ``krewe of guns in church.''

``Today I'm packing for Jesus,'' he said. Kent said his costume was in protest of a new Louisiana law allowing people to carry weapons in church.

Allen Logue, 58, walked through the French Quarter clad as a one-man oil spill cleanup crew. The oil field consultant from Barataria, La., didn't have to do much shopping to build his costume. He already had a hard-hat helmet and BP-branded sweat shirt from work he did for the company in Alaska.

``The only thing I had to shop for was the Jim Beam and that was to ease the pain of the oil spill,'' Logue said.

Sylvia Beyer, 57, of New Orleans led a group of five women in grass skirts and hats with the BP logo. On the back of their shirts were slogans, such as Broken Promises, Brazen Polluters and Bloody Pathetic. As they walked along, they passed out makeshift voodoo dolls with a photo of former BP CEO Tony Hayward pasted to each.

``We just wanted to stick it to BP. We put more time into these costumes than BP did in their disaster plan,'' Beyer said.

``I've got a split-open headache from it,'' Moser said. His wife dressed as a nurse.

Locals were in a triumphant mood, and not without reason.

New Orleans -- America's poster child of disaster -- has come a long way since Hurricane Katrina. Its beloved New Orleans Saints won the Super Bowl last year, and it has largely overcome the disaster of the BP oil spill.

This year, the timing of Mardi Gras helped. It fell later than usual and coincides with spring break for college students. Students have been out in force -- giving more punch to the annual celebration.

Two friends on spring break from Wilmington College made a 12-hour drive from Ohio.

Garret Lingoe, 21, a junior, clutched a beer at midmorning Tuesday as he talked in awe of Mardi Gras. ``I didn't know I was coming here until about five days ago and I'm sure happy I did.''

Seth Howard, a 23-year-old senior, echoed his sentiments. ``Everybody down here is just so nice and laid back.''

Ali Miller, 23, an early childhood education major at Southeastern Louisiana University, was jubilant as she walked Tuesday morning after a long night of drinking in the French Quarter.

``There is nothing like New Orleans,'' she said. ``I would never ever want to grow up anywhere but here! And Mardi Gras is the craziest time you could ever have in life -- I don't know what else to say.''

Mardi Gras was being celebrated across the Gulf Coast, in cities including Mobile, Ala., and Biloxi, Miss. In the Cajun country of southwest Louisiana, masked riders on horseback continued the tradition of riding from town to town making merry along the way.