Civil Rights Version of 'America's Most Wanted' to Air

Stacey Patton Special to the NNPA from Thedefendersonline.com
Published: 25 February 2011 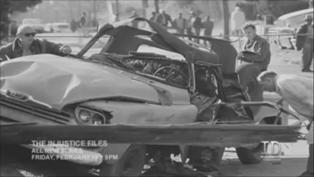 At the height of the Civil Rights Movement Martin Luther King, Jr. said, "the arc of the moral universe is long but it bends toward justice." King invoked these words over four decades ago to comfort and to galvanize those committed to making justice and racial equality in American life a reality.

But, King also reminded his listeners that the arc of justice does not bend on its own. "It bends because each of us in our own ways put our hand on that arc and we bend it in the direction of justice."

Keith Beauchamp, a 39-year-old filmmaker from Brooklyn, is one of those people.  His groundbreaking investigative documentary series "The Injustice Files" airs on the Investigative Discovery Channel Fridays at 9 p.m. The "I.D. Channel" is popularly known for such shows including "Disappeared" and "Stolen Voices, Buried Secrets" that investigate recent and old crimes.

The first show, "Secrets of Natchez," investigates the murder of Wharlest Jackson, a civil rights activist and devoted father of five who became a target of one of the most virulent Ku Klux Klan chapters in the South because he took a job that White racists deemed fit only for White men.

Teaming up with the FBI, local law enforcement officials, and surviving relatives, Beauchamp's series tells of a search for justice for Jackson's killing and other heinous racially-motivated crimes of the Civil Rights era.

"I believe in justice," says Beauchamp.  "We want to give the families justice and closure."  He says he hopes his new series will lead to "cleansing dialogue" and "race reconciliation."

Beauchamp has been on a mission ever since he was 10 years old when he saw a horrifying JET Magazine photo cover of the bloated corpse of Emmett Louis Till.  In the summer of 1955 Till was murdered for whistling at a White woman.  Beauchamp's obsession with the unsolved Till case and his passion for justice, inspired him to produce a documentary in 2004 – "The Untold Story of Emmett Louis Till."  New information uncovered in the filming led the Justice Department to reopen the Till case and pursue new suspects.  There was a sham trial in Money, Mississippi in 1955 in which an all-White jury acquitted the men charged with the crime.

The good news is that Beauchamp's work led to the Senate passage of the Emmett Till Unsolved Civil Rights Crime Act, which gives a total of $13.5 million annually to the Department of Justice, the F.B.I. and state and local law enforcement agencies to investigate and prosecute cold cases.  Like with any cold case, memories fade, people die, and others are wary of talking to the F.B.I. or other law enforcement officials.

In 2008 Beauchamp produced his first documentary series "Murder in Black and White" which aired on the TV One channel.  That series examined four killings that took place in the South during the 1940s and 1950s at a time in American history when dozens of murders of African Americans were never solved or even investigated.  The victims were active in the movement or murdered because they had in some way stepped out of their "place" in segregated America.

As he did in his 2008 series, Beauchamp dramatically recreates the past, integrates archival footage, and conducts interviews with family members, witnesses, historians, and local officials.  In doing so, he opens old wounds, angers those that want to let old sleeping dogs lie, and he successfully illuminates the conditions that galvanized the Civil Rights Movement.

The Injustice Files does not promise to solve all of its cases.  Indeed, but the blunt reality that at least some of these tragic crimes will remain unsolved only adds to the series' compelling quality.

FBI agent Cynthia Deitle, who worked alongside Beauchamp, says many of the cold cases of the Civil Rights era remain unsolved.  "That's why we are going back," she said. "If the FBI failed in the 1950s or '60s, I want to rectify that.  I want to make it right."

"To some extent," says Investigation Discovery president Henry Schleiff, "this is a civil rights version of 'America's Most Wanted.'  We hope that by portraying these stories, the witnesses will come through."

The Injustice Files series is an important history lesson, even if justice is never served.