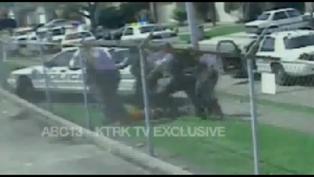 HOUSTON (AP) -- City officials announced Friday that two new independent panels will be reviewing Houston's police department, which has come under fierce criticism after a video surfaced this month that appears to show officers kicking and stomping a black teenage burglary suspect.

Mayor Annise Parker said the new oversight panels are part of an effort to restore the public's trust in police, and will review policies and procedures at the department.

``If a culture exists within (the Houston Police Department) that continue the behavior that was displayed on the video, we will root it out and we will put in place best practices that will prevent it from reoccurring,'' Parker said.

The surveillance video appears to show several officers kicking, punching and stomping on 15-year-old Chad Holley during his arrest last year at a self-storage business in southwest Houston. Four officers have since been fired and Holley's family has sued the city, and although a judge barred the video's release, a community activist showed footage to media outlets this month.

Since then, several town hall meetings have been held where residents described other incidents of alleged mistreatment by police.

On Friday, Parker said the city also planned to hire an independent group to investigate the police department's culture.

She said the newly created Independent Police Oversight Board will replace the existing Citizens' Review Committee, which some community activists had criticized as ineffective. The new board will consist of 20 members appointed by the mayor.

Its members will reflect the city's demographics and include experts in criminal justice, including retired judges and prosecutors, Parker said.

``This is an excellent opportunity for us to improve the Houston Police Department, improve our relationship with the community and make a positive change,'' McClelland said. ``I need your help to make this a police department that all Houstonians can be proud of.''

But some civil rights groups were unhappy, saying the changes are cosmetic and didn't address one of the major things they had been requesting: giving a citizens review panel subpoena powers.

The panels ``have no power whatsoever to investigate. We don't see any substantive changes. It's not independent and it's certainly not transparent,'' said Randall Kallinen, a civil rights attorney who is a member of the Greater Houston Coalition for Justice, a group that includes 16 local and national civil rights organizations.

Kallinen said civil rights groups, not the mayor, should appoint the panels' members.

Leaders in Houston's black community have been calling for changes in how police misconduct cases are investigated since Holley's arrest in March 2010. Their calls for change intensified after the video surfaced this month.

In the video, Holley is on the ground and is surrounded by at least five officers. He appears to be kicked in the head, abdomen and legs by the officers, even after he has been placed in handcuffs.

Police said the teen was arrested following a brief chase after he and three others had allegedly burglarized a home. The teenager's mother has said her son's nose was fractured, and he had multiple bruises.

The four officers who were fired are set to be tried on various charges. Holley, now 16, was convicted in October in juvenile court of burglary and put on probation.

Kallinen's group and two local members of Congress have asked the U.S. Justice Department to investigate the alleged beating.

State Sen. Rodney Ellis, D-Houston, who credited Parker with creating the new review panels, said he and other state lawmakers are considering legislation to address some of the issues brought up by the alleged beating.

Some of the ideas include making it easier statewide to establish independent citizen review boards and allowing police chiefs to consider incidents of misconduct when determining promotions.