By Dorothy Rowley Special to the NNPA from the Washington Informer
Published: 25 February 2011 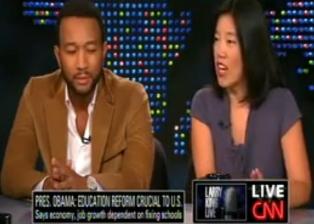 Former District of Columbia Public Schools chancellor Michelle Rhee has come under attack regarding her take on the progress of a group of elementary students during the time she taught third grade at Harlem Park Elementary School in Baltimore.  The Skanner News Video: Michelle Rhee on Larry King
Rhee taught in the Charm City's school system from 1992 to 1995. But, according to another former teacher, Guy Brandenburg, Rhee repeatedly lied about students' test scores in order to make them more impressive.
According to other news accounts, at issue is a line that appeared on her resume when she was being considered by then-Mayor Adrian Fenty to lead DCPS. It read that: "Over a two-year period, moved students scoring on average at the 13th percentile on national standardized tests to 90 percent of students scoring at the 90th percentile or higher."

n comments Brandenburg posted to a blog, which he refers to as the "Rhee Miracle in Baltimore," the school was taken under guardianship by Tesseract/Edison company for several years in the early-to-mid-1990s and failed. He went on to say that with the use of public data, he graphed the average percentile ranks of groups of students as they went through Harlem Park in first grade and then to higher grade levels.
"I highlighted the classes where Michelle Rhee was teaching," Brandenburg wrote. "In her last year, the scores did rise some, but nowhere near what she claimed. In her first year, they dropped almost as low as they can go. If Tesseract/Edison had been using the IMPACT evaluation system she foisted on DCPS teachers, she would have probably been fired after the first year."
Rhee has denied Brandenburg's claims and said recently that she could have described her accomplishments differently when she signed on in 2007 as the schools chief.
Known for her hard-nosed approach at overhauling the District's long-troubled system, Rhee left the post this past October after Fenty lost a second term at the helm.
She has since gone on to head up the education transition team for Florida's newly-elected governor, while organizing a national initiative that will be focused on fixing the nation's ailing public schools systems.
The Associated Press reported earlier this week that the District of Columbia will appeal an arbitrator's reinstating 75 teachers fired by Rhee in 2008.
Mayor Vince Gray said in a statement Wednesday that the city would appeal the ruling because officials believe the arbitrator made a mistake in saying the city should give back pay to individuals who were found "not to be effective teachers."
Arbitrator Charles Feigenbaum ruled earlier this month that the teachers should be reinstated with two years of back pay. He found that the school system never told the teachers why they were being fired and did not give them a chance to explain or refute what their principals reported to school system officials.