By The Skanner News
Published: 21 February 2011 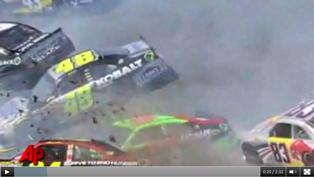 The 20-year-old became the youngest winner in Daytona 500 history Sunday with a surprise victory in NASCAR's biggest race.

He's scheduled to run only 17 Cup races this season for the Wood Brothers while he competes for the Nationwide Series title for Roush-Fenway Racing.

NASCAR rules this season made drivers pick just one series to collect points, and Bayne chose the second-tier Nationwide Series.

He can change his mind, but he would not be given retroactive points for the Daytona 500.

NASCAR officials said Monday the win would count toward seeding in the Chase for the Sprint Cup championship, but he would not receive any points for Sunday's race.

NASCAR this year changed the format for the 12-driver Chase field. The top 10 in points after the 26th race of the season make the Chase, with the final two spots going to drivers with the most wins who aren't already eligible. The drivers would have to be ranked inside the top 20.