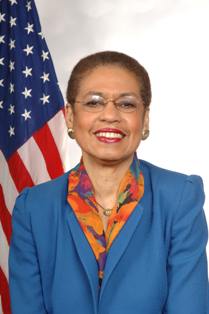 "I am extremely concerned that Congresswoman Norton was shut out of a very important hearing that affects the community in which she represents. Not only is it unfair, it's disrespectful and I plan on speaking with Chairman Franks about this matter," said Cleaver.

Congresswoman Norton also released a statement strongly objecting to being denied the opportunity to testify during the House Judiciary Subcommittee Hearing on a Bill targeting Washington, D.C. Norton was denied the opportunity to testify by Chairman Trent Franks (R-AZ), although Ranking Democratic Member Jerrold Nadler, of New York, submitted Norton's request to give testimony in advance, and although members of Congress are routinely given the courtesy to testify at any hearing of their choosing.

"Not only do Republicans seek to trample on D.C.'s rights as a self-governing jurisdiction, they apparently seek to trample on my right as a Member of Congress to participate in the legislative process by giving testimony on a bill that directly affects the District," Norton said. "We will not give up on our efforts to use every legitimate means to stop all anti-home rule attempts to roll back the progress the District has made over the past four years, including today's attempt to prevent D.C. from funding abortions for low-income residents."

A 20-year veteran of the legislative body, Norton said, she has never seen a Member of Congress turned away from testifying, particularly when the bill under consideration directly impacts the representative's district.

"I strongly oppose the harsh anti-choice H.R. 3, the No Taxpayer Funding for Abortion Act, in its entirety, but I am specifically compelled to discuss an unprecedented provision of the bill, Section 310, "Application to District of Columbia," said Norton, in a prepared statement. "This provision is entirely unrelated to the purposes of the bill, which seeks not only to write the Hyde amendment into federal law and extend it permanently, but to go much further, threatening the health of millions of women."

Last month, one of the first acts of the Republican-controlled House was to strip the floor voting rights of six delegates representing areas such as the District of Columbia, Puerto Rico, Guam and American Samoa. Five of those delegates are Democrats, while one, from the Northern Marianas Islands, is an independent.

The Republican-led decision to rescind the delegates' ability to vote on amendments on the House floor was no surprise considering Democrats extended the voting rights in 1993 when they controlled the House, Republicans took it away when they regained control of the House in 1995 and Democrats restored it in 2007.

When stripped of the voting rights, Virgin Islands Del. Donna Christensen, told the Associated Press, "This is a very undemocratic way to start the 112th Congress." In January, Norton's offer to establish a special committee to study the delegate voting rights issue was defeated along party lines.