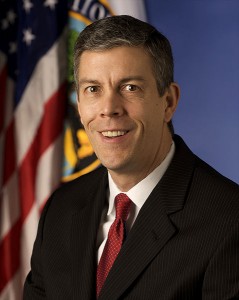 WASHINGTON (AP) -- The Obama administration set a goal Thursday of revamping the federal No Child Left Behind education law before students start the next school year in the fall, a timeframe likely to clash with the priorities of congressional Republicans.

Education Secretary Arne Duncan said the Bush-era law needs to be more flexible, and in some cases must reduce Washington's role in setting education standards. In an interview with The Associated Press, Duncan said he hopes a fresh federal law can be passed by the time lawmakers leave for their summer break.

``We would love to have it done by the August recess before students and teachers go back to school in the fall,'' Duncan said.

To reach that goal, the White House will have to persuade GOP lawmakers to move reauthorization of the law up on their priority list. The ``Pledge to America,'' which the House GOP released before taking power in the November elections, never mentioned education, and House Speaker John Boehner has made it clear that his focus is on jobs and the economy.

President Barack Obama met with top lawmakers on the Senate education committee at the White House Thursday to discuss a pathway forward for the bill; bipartisan House lawmakers had also planned to attend, but were called back to the Hill for votes before the meeting began.

White House spokesman Jay Carney said Obama reiterated his belief that reforming No Child Left Behind this year is a key priority.

``The president discussed his desire to find common ground on the need to re-define the federal role in education, so that it is more flexible and better focused on responsibility, reform, and results,'' Carney said

Iowa's Democratic Sen. Tom Harkin, chairman of the education committee, said after the meeting that the Democratic-controlled Senate is largely in agreement with the administration in wanting to complete a rewrite of the bill this year, and is already negotiating the language.

``So far in our negotiations, we haven't hit any real stumbling blocks,'' Harkin said. ``If there are any, it's on the margins, and those are being worked on.''

But the real challenge awaits in the Republican-led House, where some GOP lawmakers prefer a series of small measures to a broad rewrite of the federal law.

No Child Left Behind took effect in 2002, and was pushed toward passage by President George W. Bush's strong advocacy in his first year in office. A renewal of the law has been overdue but delayed for years. Many lawmakers from both parties say it relies too much on test results and arbitrary measurements, and doesn't meet the overall objective of raising student achievement.

The Obama administration produced a framework for a new law last year that would ease many testing requirements, put a new focus on teacher performance and the lowest-performing schools, and replace proficiency requirements with loftier goals of boosting college graduation rates. The blueprint stalled amid election-year maneuvering.

Jack Jennings, president of the Center on Education Policy, said that given objections from House Republicans, the administration's goal of having the law reauthorized by the August recess is ``highly ambitious.''

``To do it that fast I think is going to be pretty close to impossible,'' Jennings said.

Associated Press writers Erica Werner in Washington and Christine Armario in Miami contributed to this report.