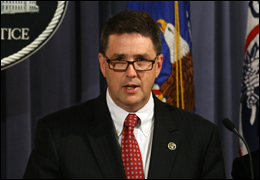 KANSAS CITY, Mo. (AP) -- In a city where there are twice as many identified gang members as there are police officers, the announcement this week that seven Kansas City residents are facing federal gang-related charges might not seem like much.

But prosecutors in Kansas City and Washington, D.C., say Wednesday's charges are just the start of a nationwide gang crackdown in which federal prosecutors are working with local jurisdictions to tackle a growing public safety threat.

``This is a major initiative,'' said Beth Phillips, U.S. attorney for the Western District of Missouri. ``We are focusing significant efforts and resources to address gang violence in the community. I fully expect additional gang-related charges in the future.''

On Wednesday, Phillips announced charges against seven alleged members of Kansas City's Click Clack Gang while federal prosecutors in four other districts were hailing charges against 34 other gang members. The Department of Justice said those numbers bring the total to 112 people who were either arrested, charged, pleaded guilty or sentenced since Feb. 1 for gang-related crimes.

``Although these cases are in different parts of the country, they illustrate the common threats gang members pose to our communities,'' said Kevin Perkins, a member of the FBI's Criminal Investigation Division. ``The FBI will use our task forces, undercover operations, and enhanced surveillance techniques to dismantle gangs to restore order to neighborhoods they terrorize.''

Gang activity has been especially troublesome in places like Kansas City, where there are only about 1,400 sworn officers and 3,000 identified gang members.

Sgt. Jay Pruetting, supervisor of the Kansas City Police Department's six-member gang squad, said that while Wednesday's announcement took only seven people off the streets, his unit is working with federal prosecutors on several other cases and he anticipates indictments against other gang members to be coming soon.

``In our city, you have a lot of gang members loosely associated, and not real territorial,'' he said. ``You will see club shootings where you get a group of kids together who have no idea who everyone is representing. Then a song starts playing, gang signs are flashed and someone starts shooting. Sometimes innocent people who are at a party to have fun are hit by gunfire.''

Pruetting said there are 35 to 40 ``actively violent'' gangs in Kansas City. In addition to his unit, other squads that focus on things like illegal firearms and career criminals also keep tabs on gang activity.

``If it weren't for the other squads, I would be in a lot of trouble,'' he said.

Pruetting said a growing Hispanic population has led to a rise in the number of Hispanic gangs, identified by the Justice Department as the primary organizational threat in the Midwest High Intensity Drug Trafficking Area region.

``Drug-related violent crime poses a problem in the Kansas City metropolitan area,'' the National Drug Intelligence Center said in its 2010 HIDTA report. ``African American and Hispanic street gangs are the primary perpetrators, and both rely on illicit drug distribution for revenue. African American gangs are dominant; while many of these gangs claim Bloods or Crips affiliation, they are local and tend to be loosely organized and based on neighborhood affiliations. Hispanic street gangs are increasing in number and are more organized and tied to nationally affiliated gangs.''

Pruetting also attributed the growing gang presence to a breakdown in the family structure and lack of responsibility on the part of parents.

``A lot of it for a lot of kids has to do with how they're raised,'' he said. ``If kids are taught manners and get a good education, 99 percent of the time they aren't going to be in a gang. That includes all cultures: white, black, Hispanic. It just comes down to how you were raised.''

Prosecutors said there's additional deterrent to gang members when they know they will be tried in federal court, where sentences carry no chance for parole, tend to be stiffer than state statutes and include forfeiture provisions under which the government can seize property obtained through or used in the commission of a crime.

``This approach is designed to send a strong message, and also to ensure that every possible sentencing enhancement tool we have is being used to address gang activity in the Kansas City area,'' Phillips said. ``It's our hope that increased penalties will make a difference. What everyone cares about is their pocketbook, and we're trying to hit them where it hurts -- not just in increased sentences.''

Two years ago the U.S. Attorney's Office in Kansas prosecuted 28 members of the Crips gang under RICO, resulting in long prison terms for several members without the chance of parole.