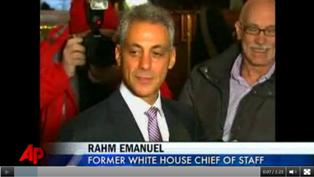 CHICAGO (AP) -- An Illinois appeals court threw former White House chief of staff Rahm Emanuel off the ballot for Chicago mayor Tuesday because he didn't live in the city in the year before the election.

The decision cast doubt over Emanuel's candidacy just a month before the election. He had been considered the front-runner and had raised more money than any other candidate.

The court voted 2-1 to overturn a lower-court ruling that would have kept his name on the Feb. 22 ballot.

Emanuel plans to appeal the matter to the Illinois Supreme Court. Early voting was set to begin on Jan. 31.

"I have no doubt that we will in the end prevail at this effort. This is just one turn in the road," Emanuel said, adding that the "people of the city of Chicago deserve the right to make the decision on who they want to be their next mayor."

Those challenging Emanuel's candidacy have argued that the Democrat does not meet the one-year residency requirement because he rented out his Chicago home and moved his family to Washington to work for President Barack Obama for nearly two years.

Emanuel has said he always intended to return to Chicago and was only living in Washington at the request of the president.

Emanuel is one of several candidates vying to replace Chicago Mayor Richard Daley, who did not seek a seventh term. Emanuel moved back to Chicago in October after he quit working for Obama to campaign full-time.

The Chicago Board of Election Commissioners and a Cook County judge have both ruled in favor of Emanuel, a former congressman, saying he didn't abandon his Chicago residency when he went to work at the White House.

Odelson had said he planned to take the challenge to the state Supreme Court, if necessary.

"Have I stood down at all? No, I've been confident all along because that's the law. That's the way you read the law," Odelson told reporters Monday.

Emanuel appeared to have gotten a big boost last week when his campaign announced he raised more than $10 million and was endorsed by former President Bill Clinton during an event in Chicago.

Del Valle said the appeal court's decision bodes well for the other candidates and voters who may have thought the race was a foregone conclusion because the amount of money Emanuel has raised.

"Now voters see there's an opportunity to look at the field and give candidates either a second look or in some cases a first look. People are going to pay more attention to the other candidates," del Valle said.

"A candidate must meet not only the Election Code's voter residency standard, but also must have actually resided within the municipality for one year prior to the election, a qualification that the candidate unquestionably does not satisfy," according to the ruling.

The residency questions have dogged Emanuel ever since he announced his candidacy last fall. Emanuel tried to move back into his house when he returned to Chicago but the family renting it wanted $100,000 to break the lease and move out early. The tenant, businessman Rob Halpin, later filed paperwork to run for mayor against Emanuel, only to withdraw from the race a short time later.

More than two dozen people testified on the residency issue at a Chicago Board of Elections hearing in December. The three-day hearing got progressively stranger as attorneys gave way to Chicago residents who filed objections to his candidacy, including one man who asked Emanuel if he caused the 1993 siege at Waco, Texas.

Emanuel's lawyer said he is hopeful the state Supreme Court will take up the case, especially since the appeals court decision was not unanimous.

"I think the fact that there's a dispute within the appellate court certainly makes the case more enticing to the Supreme Court, but I don't speak for them," lawyer Mike Kasper said.