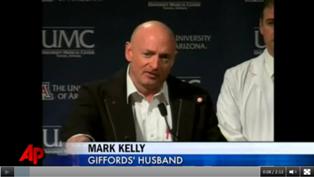 TUCSON, Ariz. (AP) -- Rep. Gabrielle Giffords can stand with assistance, the latest milestone in her recovery as her family prepares to move her to Houston for extensive mental and physical rehabilitation from a bullet wound to the brain.

Her swift transition from an intensive care unit to a rehab center is based on the latest research, which shows the sooner rehab starts, the better patients recover.

Giffords' family hopes to move the Arizona congresswoman on Friday to TIRR Memorial Hermann hospital in Houston, where her husband lives and works as an astronaut.

"I'm extremely hopeful that Gabrielle is going to make a full recovery," Mark Kelly said at a news conference at University Medical Center. "She is a fighter like nobody else that I know."

He predicted that she will walk back into the hospital in Tucson soon, and thank everyone who took care of her.

"In two months, you'll see her walking through the front door of this building," he said.

Giffords' progress was evident Wednesday as she stood on her feet with assistance from medical staff, the hospital said.

During rehabilitation she will have to relearn how to think and plan. It's unclear if she is able to speak or how well she can see. And while she is moving both arms and legs, it's uncertain how much strength she has on her right side.

A gunman shot Giffords and 18 other people Jan. 8 as she met with constituents outside a grocery store in Tucson. Six people died and the other wounded. All survivors have been released from hospitals except Giffords.

The suspect in the attack, Jared Loughner, 22, of Tucson, was indicted by a federal grand jury in Tucson Wednesday, accused of attempting to assassinate Giffords and trying to kill two of her aides.

It does not include two murder charges listed in an earlier criminal complaint for the deaths of Giffords aide Gabe Zimmerman, 30, and U.S. District Judge John Roll, 63. Those are potential death penalty charges and prosecutors said they require a more painstaking process. Additional charges are likely.

Loughner is in federal custody. He is set for a preliminary hearing on Monday in Phoenix.

Though Giffords remains in serious condition, her recovery has amazed her family and impressed her doctors.

Dr. John Holcomb, retired Army colonel and a trauma surgeon at the Houston hospital, praised the care she received in Tucson and said Giffords would "move quickly toward a tailored and comprehensive rehab plan."

Over the weekend, she was weaned off the ventilator and had her breathing tube replaced with a tracheotomy tube in her windpipe. Doctors also inserted a feeding tube to boost her calorie intake and repaired her right eye socket, which was damaged by the bullet.

Since being taken off sedation, Giffords has been alert and opening her eyes more often. She also started rigorous physical therapy, dangling her legs over her bedside to exercise her muscles and sitting in a chair for periods at a time. Kelly told ABC in an interview that she gave him a neck rub.

Still, the extent of her injuries and long-term prognosis won't be known for some time.

"When she's medically stable, there's really no reason to keep her there," where she could get infections and other complications long known to plague patients with long hospital stays, said Dr. Steve Williams, rehab chief at Boston Medical Center and the Boston University School of Medicine.

"Over the last five to 10 years, there has been a big push to getting patients rapidly to rehab," because research shows they recover faster and better the earlier therapy starts, he said.

Giffords will likely be moved to Houston by Medevac jet, Williams said, and there is little risk of a brain injury from flying. Since part of her skull has been removed, there is less pressure on the brain, and there has been no problem with swelling during her recovery. During rehab, she will probably wear a helmet.

Once she arrives in Houston, doctors will do a complete assessment of what Giffords can and cannot do, said Dr. Reid Thompson, neurosurgery chief at Vanderbilt University in Nashville.

"The rehab is going to be pretty intense for her, both cognitively and physically," because she'll need to recover frontal lobe functions, Thompson said. "She's going to have to relearn how to think, plan, organize."

A penetrating brain injury like a bullet wound leaves a specific path of damage. Giffords' wound path appears to be below the motor cortex, which controls movement, but may include an area controlling speech, Williams said.

He is not involved in Giffords' care and based his comments on diagrams and reports of her injury that have been made public so far.

"One of the questions is whether she'll be able to speak," Williams said. Giffords has a breathing tube now, and even if this impedes her speech, she might be able to mouth words.

"That would be a good indication that she at least is able to express herself," Williams said.

"The cognitive ability and the speech are the key things," he said. "We know that she's moving her limbs. The question is, how strong is she."

Remarkably, Giffords may not spend much time at TIRR. She will probably spend just five to eight weeks at the rehab center, then continue getting therapy as an outpatient, Williams said.

"Her early recovery is very promising," and bodes well for further improvement, he said.