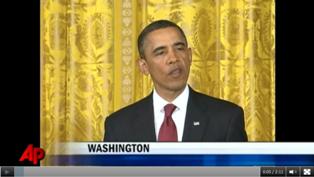 WASHINGTON (AP) -- Chinese President Hu Jintao declared Wednesday that "a lot still needs to be done" to improve his country's record on human rights, a rare concession that came after President Barack Obama asserted that such rights are "core views" among Americans.

The exchange over human rights was balanced by U.S. delight over newly announced Chinese business deals expected to generate about $45 billion in new export sales for the U.S.

Those agreements were cemented during Wednesday's summit meeting between the leaders of the world's two largest economies. Obama said the deals would help create 235,000 U.S. jobs.

"I absolutely believe China's peaceful rise is good for the world, and it's good for America," Obama said, addressing a major concern in Beijing that the United States wants to see China's growth constrained.

"We just want to make sure that (its) rise occurs in a way that reinforces international norms, international rules, and enhances security and peace as opposed to it being a source of conflict either in the region or around the world," Obama said.

The daylong working sessions by the two world leaders played out against lingering distrust that Obama and Hu tried to address in their own countries. Hu asserted Chinese sovereignty and China's desire to pursue economic growth. Obama tried to reassure China critics, even in his own party, by stressing China's place as a growing market for U.S. goods.

"We want to sell you all kinds of stuff," he said.

The U.S. Chamber of Commerce voiced cautious optimism, applauding the advances in trade announced Wednesday while contending that China still needs to make structural changes to facilitate an economic relationship.

"They have learned over the years that throwing a bone to the Americans is a pretty good way to shut them up," said Charles Freeman, a China expert at the Center for Strategic and International Studies.

The two leaders, standing side by side at a joint news conference in the White House East Room, vowed closer cooperation on critical issues ranging from increasing trade to fighting terrorism. But they also stood fast on differences, especially over human rights.

Obama noted that China's human rights policies were a source of tension between the two governments. The U.S. has called for expanded religious freedoms and for China to release jailed dissidents, including Nobel Peace Prize winner Liu Xiaobo, who was prevented from attending the Dec. 10 prize ceremony in the Norwegian capital.

"We have some core views as Americans about the universality of certain rights: freedom of speech, freedom of religion, freedom of assembly," Obama said.

Hu at first didn't respond to an American reporter's question on human rights differences between the two countries. Pressed about it in a later question, he said technical difficulties in translation had prevented him from hearing the question, though it is unclear what transpired at that moment.

He argued that human rights should be viewed in the context of different national circumstances.

Hu said that while China "is willing to engage in dialogue" with the U.S. and other nations on human rights issues, countries must exercise "the principle of noninterference in each other's internal affairs."

On another contentious issue, Obama said that the United States continues to believe that China's currency is undervalued, making Chinese imports cheaper in the United States and other countries and U.S. goods more expensive in China.

"I told President Hu that we welcomed China's increasing the flexibility of its currency," Obama said. But, he added, the yuan, also called the renminbi, "remains undervalued, that there needs to be further adjustment in the exchange rate, and that this can be a powerful tool for China boosting domestic demand and lessening the inflationary pressures in their economy."

In a sign of the growing economic bonds between the two superpowers, Obama also said China was taking significant steps to curtail the theft of intellectual property and expand U.S. investment.

Obama said China had become "one of the top markets for American exports" and that these exports have helped to support a half million U.S. jobs.

U.S. companies have also bristled at China's "indigenous innovation" policy, which limits Beijing's purchase of foreign products to those designed in China. The White House said Wednesday that China took steps to ease that policy.

Obama welcomed Hu to the White House with full honors and a red-carpet greeting, marking the start of daylong meetings to address trade, security and human rights issues that have been the cause of strains between the two powers.

The day's work was to end with a lavish state dinner Wednesday night at the White House.

For all the pomp and ceremony, tensions between the nations were boldly evident. Senate Majority Leader Harry Reid of Nevada, a member of Obama's party, called Hu "a dictator."

In the House of Representatives, several members of the Republican-led Foreign Affairs Committee assailed the Chinese government's record on human rights, military expansion, financial strategy and weapons sales. Several witnesses testifying at a committee hearing Wednesday, among them retired military officers and diplomats, echoed the lawmakers' harsh take on China.

"When the Cold War ended over two decades ago, many in the West assumed that the threat from communism had been buried with the rubble of the Berlin Wall. However, while America slept, an authoritarian China was on the rise," Rep. Ilena Ros-Lehtinen, R-Fla., chairwoman of the committee, said.

The state visit marked Hu's first trip to the U.S. since 2006, when his arrival ceremony was marred by protocol blunders and an outburst from a protester from the Falun Gong spiritual sect. No such missteps occurred Wednesday.