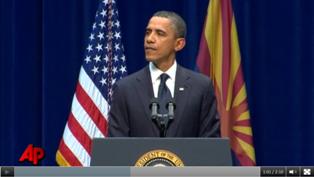 TUCSON, Ariz. (AP) -- President Obama exhorted Americans to refrain from partisan bickering and urged the country to embrace the idealistic vision of democracy held by 9-year-old Christina Taylor Green, the youngest Arizona shooting victim and an aspiring politician who is set to be buried Thursday in the first of half-a-dozen funerals.
The Skanner News Video here
Speaking to an arena audience of about 14,000 and even more in a nearby football stadium and at homes across the country, Obama drew on themes of unity, patriotism and heroism as he tried to help the nation make sense of a tragedy that unfolded as citizens were exercising their most basic of rights, meeting with their congresswoman.

Christina and five others were killed and 13 injured Saturday in a shooting rampage as a crowd waited to meet Democratic Rep. Gabrielle Giffords, who was shot in the head and left gravely wounded. Obama revealed during his speech that she had opened her eyes for the first time shortly after he visited her bedside.

Obama focused on memories of the victims and the heroism of those who sprang to their aid after the gunfire. He steered clear of the political tit-for-tat that has consumed much of the dialogue since the massacre while acknowledging the "sharp polarization" that has gripped the country.

He reminded the audience that the third-grader's neighbor had brought Christina, a Little League player and newly elected student council member, to meet Giffords because of her budding interest in democracy.

"She saw all this through the eyes of a child, undimmed by the cynicism or vitriol that we adults all too often just take for granted," he said. "I want to live up to her expectations. I want our democracy to be as good as Christina imagined it. I want America to be as good as she imagined it."

The funeral for Christina, who was born on Sept. 11, 2001, was set for 1 p.m. MST (3 p.m. EST). It was to be the first of several planned in the coming days for the victims, including a federal judge with nearly 40 years of service and a Giffords aide who was about to be married.

Obama's comments brought the crowd to their feet and his speech was frequently punctuated by rousing cheers and applause. One woman waved a sign that read "We Will Heal!" while another hoisted a painting of the president.

Obama bluntly conceded that there was no way to know what triggered the shooting rampage and cautioned America to avoid dwelling on the role of incendiary rhetoric that could sully the memory of the victims.

"If this tragedy prompts reflection and debate - as it should - let's make sure it's worthy of those we have lost," he said. "Let's make sure it's not on the usual plane of politics and point-scoring and pettiness that drifts away in the next news cycle."

The president also lauded the actions of the men who wrestled the gunman to the ground, the woman who grabbed the shooter's ammunition, the doctors and nurses who treated the injured and the first responders. He singled out for praise a Giffords intern and University of Arizona junior who tried to staunch the congresswoman's bleeding.

The intern, 20-year-old political science student Daniel Hernandez, was seated next to Obama during the service and appeared to tear up after the crowd broke into deafening applause at Obama's tribute. Hernandez spoke briefly before the president and rejected the label of hero, saying those involved in public service are true heroes.

"Daniel, I'm sorry, you may deny it, but we've decided you are a hero because you ran through the chaos to minister to your boss, and tended to her wounds and helped keep her alive," the president said.

The attack ended when bystanders tackled the suspect, Jared Lee Loughner, 22, who is in custody and has been charged with murder and attempted murder.

Those who attended Obama's speech said they appreciated that he focused on the memories of the fallen without adding to the political back-and-forth that has marked the days since the tragedy.

Karla Schumann, 41, drove from Phoenix to attend and said she particularly was touched by Obama's challenge to Americans to live up to the Christina's innocent beliefs. She left wearing a blue T-shirt emblazoned with the words "Together We Thrive: Tucson & America," which had been given to each attendee.

"I think Obama was spot on. He really pumped the patriotism but it wasn't distasteful and I appreciate that immensely," she said. "He basically said he wants us to live up to the America she believed in. ... Sometimes we have to be reminded of that."

High school basketball coach and graduate student Briana Felix, 28, said her family was friends with John Roll, the federal judge, and the mother of one of her team members was shot but survived.

"I was privileged to hear one of the best orators of our time and I think he struck a chord in the right spot, calling on us to come to a common place and get over the hate and the fear," she said.