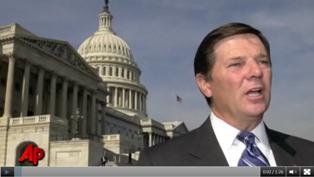 AUSTIN, Texas (AP) -- Former U.S. House Majority Leader Tom DeLay remained defiant as he faced a judge's sentence to three years in prison for a scheme to illegally influence Texas elections, insisting he committed no crime and was the victim of selective prosecution by authorities targeting his politics.
The Skanner News Video here
"Everything I did was covered by accountants and lawyers telling me what I had to do to stay within the law," the Houston-area Republican said. "I can't be remorseful for something I don't think I did."

But Senior Judge Pat Priest disagreed with DeLay, saying those who write laws should be bound by them, and sentenced the man once considered one of the nation's most powerful and feared lawmakers to three years in prison.

The sentence came after a jury convicted DeLay in November on charges of money laundering and conspiracy to commit money laundering for using a political action committee to illegally send corporate donations to Texas House candidates in 2002.

Prosecutors said DeLay will likely be free for months or even years while his appeal makes its way through the Texas court system.

DeLay declined to talk to reporters after he posted a $10,000 bond following three hours in the Travis County jail, where he was taken after being sentenced.

During a 10-minute speech to the judge before his sentencing, DeLay said the politically motivated case against him had affected his wife's health, forced him to raise and spend $10 million in legal fees and cost him everything he had worked for - including the second-highest post in the U.S. House.

"Just because somebody disagrees with you they got to put you in jail, bankrupt you, destroy your family," he said.

Lead prosecutor Gary Cobb said there was nothing political about DeLay's prosecution and called the former congressman "arrogant" for not taking responsibility for his crime.

"He's been accusing us of (politics) ever since Day One. But every time someone opposes him, tries to hold him to account for something he's done, he accuses those people of politics," Cobb said.

After the sentencing, DeLay's attorney Dick DeGuerin said only that the case would not stand on appeal.

"Tom DeLay did not steal. He did not rob. He did not line his own pockets. He did what he did because he believed he was doing right," DeGuerin, who had asked for probation for the ex-lawmaker, said before the sentencing.

Prosecutors, who wanted a 10-year sentence, said DeLay should not be given probation because he had shown no remorse.

Priest sentenced DeLay to the three-year term on the conspiracy charge. He also sentenced him to five years in prison on the money laundering charge but allowed DeLay to serve 10 years of probation instead of more prison time. DeLay had faced up to life in prison.

The ruling came after a brief sentencing hearing in which former U.S. House Speaker Dennis Hastert testified on DeLay's behalf.

Hastert, an Illinois Republican who was House speaker from 1999 to 2006, said DeLay was not motivated by power but by a need to help others. Hastert talked about DeLay's conservative and religious values, his efforts to provide tax relief for his constituents in Texas, his work helping foster children and the help he provided to the family of one of the police officers who was killed in a 1998 shooting at the U.S. Capitol in Washington.

"That's the real Tom DeLay that a lot of people never got to see," said Hastert, who was DeLay's only witness.

After a month-long trial in November, a jury determined DeLay conspired with two associates to use his Texas-based political action committee to send $190,000 in corporate money to an arm of the Washington-based Republican National Committee. The RNC then sent the same amount to seven Texas House candidates. Under Texas law, corporate money can't go directly to political campaigns.