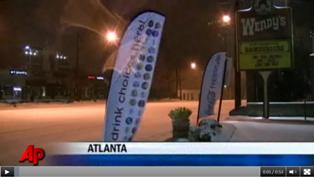 ATLANTA (AP) -- Stranded vehicles littered roadsides Monday as several inches of snow and sleet coated Atlanta and other parts of the South, freezing the morning commute in many areas and canceling thousands of flights through the world's busiest airport.

Sleet, ice and several inches of snow - as much as 9 inches in some places - blanketed states from Louisiana to the Carolinas mostly unaccustomed to arctic weather and caused at least three deaths and left thousands without power. It also hit a part of the country where most major cities have only a handful of snow plows, if any at all.

The heaviest snow was creeping into South Carolina on Monday morning, but forecasters warned that treacherous travel conditions in many areas of the region could last until Tuesday as below-freezing temperatures turn plowed slush into ice. Officials in several states repoted hundreds of car crashes and urged drivers to stay home. More than 2,000 flights had been canceled around the South - affecting passengers as far away as Scandinavia.

In Atlanta, under three to four inches of snow and ice, state officials were forced to move Monday's inauguration of Gov. Nathan Deal from the state Capitol steps into the House chamber. The inaugural gala was scrapped to keep supporters off treacherous roads.

Emily Blackwell and Whitney Ball, both 22-year-old students at Georgia State University, were stuck Monday at a north Atlanta apartment complex where they'd come to watch football the night before. Ball's late 1990s model, white Ford Mustang had rear-wheel drive and couldn't make it up the steep hill at the complex.

"It was slushy" Sunday night, Ball said. "I tried to drive on it, but it was just as bad."

Both had hoped to get home before the snow hit. They said they had been well-stocked with food and supplies at their own homes - but that their friends weren't as prepared.

Michigan native Phil Cooper, who lives in the Atlanta suburb of Marietta, said he drove 20 miles on barely plowed highways to get to work in the northern part of the city.

"Pretty normal for Michigan, but here in Atlanta, you take 16 lanes of highway and it turns into two," Cooper said.

The winter weather began rolling across the South on Sunday, coating bridges and roads with snow, sleet and freezing rain. The governors of Louisiana, Alabama, Georgia and Tennessee declared emergencies and schools and colleges called off classes.

The snowy weather would begin spreading north to Ohio by Tuesday, forecasters said.

In Alabama, roads were coated with ice in Shelby County, just south of Birmingham, where Waffle House waitress Stephanie McGougin served eggs and grits to the few diners who could make it inside early Monday. There were plenty of empty seats at the restaurant, which is normally busy.

"I think we're about the only place open," McGougin said.

Despite officials imploring people to stay off the roads, interstates around Atlanta were clogged with cars early Monday. Elsewhere all over the South, cars were having trouble on the slippery streets and highways, with numerous slideoffs.

Georgia was expecting up to 6 inches in the northern mountains from the powerful storm that was also dumping snow and ice in Mississippi, Alabama, the Carolinas, Tennessee, Oklahoma, Arkansas and Texas. Sleet and freezing rain could last into Tuesday in Georgia and the Carolinas.

Highway crews were working to keep major roads passable. Georgia Department of Transportation spokesman Rick Parham said Monday morning that at least one lane was open in each direction on all major highways.

"Since it's going to be pretty cold over the next few days, we could see whatever accumulates sticking around for a few days," National Weather Service meteorologist Daniel Lamb said.

Outside Nashville, Carla Gaster, the facilities manager for 20/20 Research, observed the snow through her kitchen window in Ashland City before dawn Monday.

"It's really soft, fluffy and pretty," Gaster said, adding she was glad she didn't have to drive in it.

"I work for a company that allows me to work from home," she said.

Tim Loucks, general manager of the Pilot Truck Stop in the northwestern Louisiana town of Haughton, said he had an empty diner as truckers who slept on his lot during the night were pulling out.

"Interstate 20 is open, but it's moving slow," Loucks said. "There's ice on the bridges and overpasses."

Loucks said the situation was different for drivers trying to drive on local roads. "If you're off the main roads, it's a skating rink," he said.

Icy roads were blamed in separate accidents Sunday that killed two people in northern Louisiana. A third person died in Tulsa County, Okla., when her car went off an icy road and into a pond, officials said.

Alabama Gov. Bob Riley said workers had readied snow and salt trucks to help clear icy roads, and asked all residents to stay home through Monday unless it is imperative to travel.

Most canceled flights across the region had been scheduled to fly into or out of Hartsfield-Jackson Atlanta International Airport, the world's busiest. The airport's long halls were nearly deserted on what would normally be a chaotic Monday morning.

For some whose flights made it to Atlanta, the sight of snow-covered runways was disorienting. Larry and Judy Keefauver, of Buffalo, thought their flight from Sacramento had landed somewhere else when they looked out the window.

"I have been flying (through Atlanta) since the early 70s and I've never landed on snow here ever," Larry Keefauver, 62, said.

The worship leader at one prepared to use a web camera to broadcast an abbreviated worship service over the Internet from his home since members couldn't make it to church.

"I'll just do one or two acoustic songs, something like that, just to keep it going until next week," said Ben Nelson of Helena United Methodist Church in suburban Birmingham. Besides snow, some areas around the city have gotten a tenth of an inch of ice, the weather service said.

Auburn University students must go somewhere other than campus to watch the Tigers play in the national championship bowl game Monday. The university has canceled all viewing parties and other events planned as the state prepares for severe winter weather.