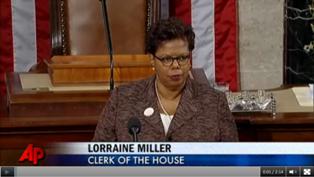 WASHINGTON (AP) — Ascending to speaker of the House, Rep. John Boehner is ready to take the gavel from Democrat Nancy Pelosi, vowing to "give government back to the people" and bring an end to congressional gridlock.

The Skanner News Live Video Stream of 112th Congress here
"The American people have humbled us. They have refreshed our memories as to just how temporary the privilege to serve is," Boehner says in remarks prepared for his installation later Wednesday as the new speaker. "This is their Congress. It's about them, not us."

Taking control of the House at last, Republicans are rushing straight into a political fight with President Barack Obama over health care and changes in Washington they say voters demanded in the midterm elections.

"No longer can we kick the can down the road," Boehner will tell the House. "The people voted to end business as usual, and today we begin carrying out their instructions."

The oath-taking ends two years of Democratic dominance in the capital and ushers in a divided government in the run-up to the 2012 congressional and presidential elections. With campaigns but a short time away, Obama and congressional Republicans are set to square off over the size of government and the taxpayer dollars it spends.

Fresh from a Hawaii vacation, Obama told reporters he expects Republicans initially to "play to their base."

"But I'm pretty confident that they're going to recognize that our job is to govern and make sure that we are delivering jobs for the American people," he added. "My hope is that John Boehner and (Senate GOP leader) Mitch McConnell will realize that there will be plenty of time to campaign for 2012 in 2012."

For now, both parties will build their election-year cases in the congressional arena.

It began Wednesday morning when Boehner joined Pelosi and others at a bipartisan prayer service at St. Peter's Catholic Church near the Capitol. It continues when Pelosi, the Californian who made history by becoming the first woman speaker four years ago, hands the s gavel to Boehner, the affable Ohioan with blue collar roots, and the new Congress is sworn into office. Republicans have promised to run the House with an eye toward saving and cutting spending, and in a manner more open to public scrutiny and debate.

In his prepared remarks, Boehner said the voters "have reminded us that everything here is on loan from them. That includes this gavel, which I accept cheerfully and gratefully, knowing I am but its caretaker."

Flexing its newfound muscles, the incoming GOP majority is preparing to break its own new rules next week when it votes, without hearings or a chance to make changes, to cancel Obama's signature health care law.

"It's not like we haven't litigated this for over a year," Boehner said Tuesday.

Across the Capitol, the Senate opens for business with the Democrats' majority down from 60 votes two years ago to 53 — making it harder to enact legislation Obama seeks. But it gives them more than enough clout to block passage of bills like the health care repeal House Republicans want.

The shrunken Democratic ranks give Republicans leverage to bargain for a reduction in spending on items like a $1.4 billion food safety measure Obama signed Tuesday.

Wednesday's focus is back in the House, where the GOP's new "cut and grow majority" envisions curbs on government spending and regulations to spur the economy, Cantor said.

The first spending cut vote is set for Thursday, a 5 percent reduction in the amount ticketed for lawmakers' and committees' offices and leadership staff. Aides estimate the savings at $35 million over the next nine months.

Republicans have pledged to vote at least once a week on bills that cut spending. And Cantor challenged Obama to include significant spending cuts in his State of the Union address on Jan. 25.

But Republicans acknowledge they must do more than oppose Obama's every proposal, as they did the past two years of Democratic rule. That might mean compromise, anathema to GOP hardliners, setting up the potential for conflicts in the party.

The effort to repeal health care overhaul appears to be exempt from some of the new majority's stated priorities and reforms.

One of the first votes on Wednesday will be the enactment of a series of rules changes that Republicans crafted to increase openness in Congress' proceedings. Despite that, the new majority intends to pass the health care repeal next week without committee hearings or permitting Democrats a chance to seek changes.

Republicans also have decided to ignore estimates from the Congressional Budget Office that the bill as it originally passed would cut spending by $143 billion over the next decade.

"Everyone knows ... this bill has the potential to bankrupt the federal government and the states," Cantor said. He cited no estimates and refused to acknowledge that repeal would increase deficits at a time Republicans have vowed to reduce red ink.

Cantor said Democrats would be allowed to seek changes when Republicans draft an alternative health care bill. No timetable has been set.

The Senate moves more slowly than the House.

A group of Democrats led by Sen. Tom Udall of New Mexico was expected to propose changes on Wednesday that would make it harder for the minority to delay legislation by filibuster. It's a key question now that Democrats are seven senators short of the 60 required to break such logjams.

"The brazenness of this proposed action is that Democrats are proposing to use the very tactics that in the past almost every Democratic leader has denounced, including President Obama and Vice President Biden,'" Sen. Lamar Alexander, R-Tenn., said in a speech Tuesday.

No resolution is expected for weeks.

The filibuster rules were last changed more than a quarter-century ago, when the number of votes needed to end the stalling tactic was reduced to 60. A two-thirds majority had previously been required.

Their power all but gone, House Democrats head into the minority after four years in control.

Outgoing Speaker Pelosi, the next minority leader, declined to reflect on her historic four-year tenure as the first woman to preside over the House.

"Actually, I don't really look back. I look forward," she said.