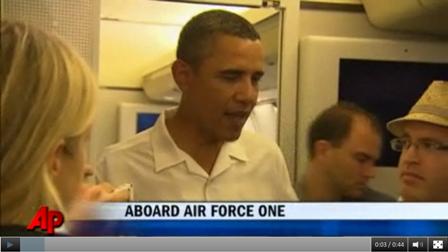 AIR FORCE ONE (AP) -- Ending a two-week vacation, President Barack Obama is appealing to newly-empowered Republicans to resist jockeying for the White House in 2012 and work with him to get the economy growing and the jobless back to work.
The Skanner News Video here
Facing anything but a political soft landing after his holiday stay in Hawaii, Obama told reporters en route to the capital Tuesday that he understands Republicans, who recaptured the House in last fall's elections, "are going to play to their base for a certain period of time."

"But I'm pretty confident that they're going to recognize that our job is to govern and make sure that we are delivering jobs for the American people and that we are creating a competitive economy for the 21st century," the president said.

Not only does Obama face an emboldened Republican caucus in Congress, he also is confronting the first major shake-up of his senior White House staff.

The first weeks of the new year will be an early test of how he will deal with a divided Congress and whether he can build on the victories he secured during the final days of the lame-duck legislative session. And with a host of Republicans readying to run for his job, the administration will simultaneously be laying the groundwork for Obama's re-election bid, which will be operated out of Chicago.

Obama was arriving back in Washington before midday Tuesday, a day before lawmakers on Capitol Hill reconvene. Republicans, having taken control of the House and boosted their seats in the Senate, are promising to take aim at the president's agenda, from his spending plans to his health care overhaul. And they're not wasting any time.

Republicans in the House are planning to vote on a full repeal of Obama's health care law before the president's State of the Union address later this month. However, Democrats will control the Senate and could thwart the repeal drive. And Obama has promised to veto a repeal if it reaches his desk. Even so, Republicans say they will try to starve the overhaul of money and dismantle it piece by piece.

Obama will also face opposition on spending and the debt. Though the president has said the nation's long-term fiscal health must be addressed, he's warned that cutting spending now could be disastrous for the fragile economic recovery.

But conservative Republicans, including many newly elected members of Congress, want to cut spending immediately. The first test of how much Obama is willing to compromise with this wing of the GOP comes in February, when lawmakers have to pass a massive spending bill to keep the government running.

Obama said he hopes that House Speaker-designate John Boehner and Senate Republican Leader Mitch McConnell "will realize that there will be plenty of time to campaign for 2012 in 2012. And that our job this year is to make sure that we build on recovery."

But 2012, nevertheless, is fast approaching, and he knows it.

Senior adviser David Axelrod plans to head to Chicago this month, with Obama's 2008 campaign manager, David Plouffe, taking his place at the White House. More staff will follow Axelrod to Chicago, though aides have not yet been asked to commit to making the move.

Obama is also considering naming former Commerce Secretary William Daley to a top White House job, possibly chief of staff, a person familiar with the matter said Monday. Daley, an executive at JPMorgan Chase, would bring extensive private sector experience to a White House seeking to counter the notion that the president is antibusiness.

The person was not authorized to speak publicly on the manner and requested anonymity.

After making only a few brief public appearances during his nearly two week family vacation, Obama eased back into the public eye on his final day in Hawaii. After an afternoon at the beach, Obama treated his friends and family to shave ice, a Hawaiian snow cone, stopping to shake hands and talk with people who had gathered near the Island Snow store that is a favorite of the Obamas. He also joined his family for an evening trip to the Honolulu Zoo.

"You know, I think there's going to be politics. That's what happens in Washington. They are going to play to their base for a certain period of time. But I'm pretty confident that they're going to recognize that our job is to govern," Obama said to reporters traveling back to the capital with him on Air Force One.

Another critical juncture could come as early as March, when lawmakers vote on whether to raise the debt ceiling. Some GOP lawmakers, including South Carolina Sen. Lindsey Graham, have said they won't vote to raise the debt limit unless there is a plan in place for dealing with long-term obligations, including Social Security, and for returning to 2008 spending levels.

With the debt ceiling at $14.3 trillion, and the debt at nearly $13.9 trillion and growing daily, White House economist Austan Goolsbee said that refusing to raise the limit would have a "catastrophic" impact on the economy.

Despite Republican gains, Obama still holds some leverage - namely a Democratic majority in the Senate that could counter Republican action in the House, and the veto power of the executive branch. He's also coming off a successful run in the final weeks of 2010, having secured wins on a tax compromise with Republicans, a new nuclear arms treaty with Russia and the repeal of the military's ban on openly gay service members.

Still, Obama has said there is unfinished business he wants to address this year, including energy legislation and immigration reform, specifically the DREAM Act, which was defeated in Congress last month. He has said he'll make another go at the legislation, which would provide a path to citizenship for young people brought to the U.S. illegally if they go to college or join the military.

White House officials say they also see some opportunities to capitalize on that momentum and work with Republicans, including on looming trade deals with Colombia and Panama, and the reauthorization of the No Child Left Behind education act.

In an op-ed piece in The Washington Post on Monday, Education Secretary Arne Duncan said lawmakers from both parties are already working together to draft a reauthorization, and said, "few areas are more suited for bipartisan action than education reform."

Preparations are under way for a busy month for Obama, including visits from at least two allies. Obama will host French President Nicolas Sarkozy on Jan. 10, said a senior administration official who confirmed the visit on condition of anonymity because it had not yet been announced by the White House. In addition, Chinese President Hu Jintao will be in Washington for a state visit on Jan. 19.

Obama will deliver his State of the Union address later this month, in which he'll outline his agenda for the year, including proposals for deficit reduction.

Change will be coming to the White House. Obama spent some of his Hawaiian holiday reviewing a staff restructuring review led by interim chief of staff Pete Rouse. While officials have cautioned that there won't be sweeping changes throughout the West Wing, some shifts will be made quickly after the president's return to Washington.

The new NEC director will have broad oversight of the administration's economic decisions and could signal a shift in policy as the White House grapples with a 9.8 percent national unemployment rate.