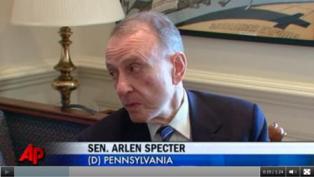 In his final floor speech, Specter complained there's scant room for centrists like himself in a polarized Senate where civility is in short supply.

"In some quarters, compromise has become a dirty word," said Pennsylvania's longest-serving senator, who lost his re-election bid after three decades in the Senate.

"Eating or defeating your own is a form of sophisticated cannibalism," he said.

Specter said the re-election of Alaska Sen. Lisa Murkowski on a write-in vote against the tea party challenger who toppled her in the primary may show the way to "counter right-wing extremists."

Specter, 80, has been a fixture in American politics, emerging as a prominent centrist who used his willingness to cross party lines on key votes as a way to boost his clout in Congress. Specter has overcome a brain tumor, cardiac arrest following bypass surgery, and two bouts with Hodgkin's disease.

He lost the Democratic primary last May to Rep. Joe Sestak after taking the risky step of switching from the GOP in his bid for a sixth term. Specter would have faced a tough Republican primary challenge from Pat Toomey, who eventually beat Sestak in the Nov. 2 race.