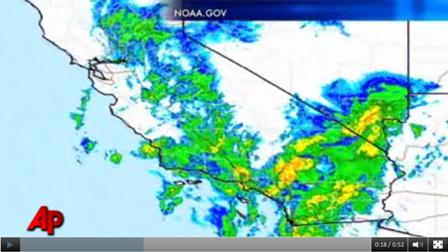 LOS ANGELES (AP) — After days of relentless rain, Southern California on Wednesday was facing the most intense storm system yet, with hundreds of homes evacuated, roads covered with water and mud, and residents anxiously eyeing already saturated mountainsides denuded by wildfires.
The Skanner News Video here
Forecasters expected heavy rain to move into Arizona, Utah and Nevada, but the focus clearly was on Southern California, where a monster storm was expected to bring torrential rain, thunderstorms, flooding, hail and possible tornadoes. Officials warned of possible rainfall rates of 0.75 inch to 1 inch an hour and thunderstorm rates of 2 inches an hour in the region.

A rain-soaked hillside collapsed on part of a busy Interstate 10 transition road Wednesday as overwhelmed drains left hubcap-deep pools of water on roadways littered with fender-bender crashes. The landslide covered three lanes of the transition to State Route 57 in the Pomona area, and the California Highway Patrol shut down part of the ramp before the morning rush hour.

In Orange County, rain-loosened boulders and mud blocked access to mountain homes in Silverado Canyon near the Cleveland National Forest, where firefighters were helping evacuate 25 to 30 people whose homes were threatened by rolling boulders and debris flows.

More than 30 people were rescued Wednesday morning from stranded cars and homes in hillside areas of Laguna Beach and adjoining Laguna Woods. Laguna Beach police Lt. Jason Kravetz said one man was rescued after a landslide collapsed one wall of his home.

About a square mile of Laguna Beach, including the downtown area, was closed when storm runoff sent mud and up to 4 feet of rushing water over the streets. The waters receded, but Kravetz said an approaching high tide could renew problems.

Officials on Tuesday ordered evacuation of 232 homes in La Canada Flintridge and La Crescenta, suburbs of Los Angeles below steep hillsides that burned in 2009 and where mudslides inundated homes and backyards in February.

Walt Kalepsch said his backyard filled with mud and debris last winter, but he planned to stay the night with his wife and daughter.

"If it gets really terrible, we'll leave. But we've been evacuated so many times, it's like the city's crying wolf," he said. "During the rest of the year, it's absolutely gorgeous. It was just one big wildfire that changed everything."

The huge and powerful low pressure system off the West Coast pushed precipitation right into the Great Basin.

"It takes a lot of energy to push that moisture over the mountains," said NWS meteorologist Dave Bruno. "This kind of storm could march right across the country and create a lot of bad weather along the way. It could affect the Southern Plains on Thursday and Friday. If it sticks together it'll hit Florida by Saturday."

Flood warnings and emergency declarations were in place in parts of Utah, Nevada and Arizona.

A man in his 70s collapsed from an apparent heart attack when flooding reached his home while friends tried to protect it with sandbags, Evans said. He was taken to a hospital but his condition wasn't immediately available.

About 60 miles away, evacuation orders for the entire town of Rockville, Utah — population 247 — were lifted after a dam feared close to breaking was declared safe. Nearby Zion National Park also was evacuated and shut down.

In southern Nevada, a state of emergency was ordered after rain-swollen creeks closed some roads in the Las Vegas area and snow disrupted electricity to about 300 customers on nearby Mount Charleston.

With rain falling up and down California, Sierra Nevada ski resorts boasted of record-breaking December snowfall, with the storms bringing 10½ to 15½ feet to Mammoth Mountain.

Downtown Los Angeles received more than a third of its annual average rainfall in less than a week.

Parts of the San Gabriel Mountains got more than 18 inches of rain since Friday, with coastal cities like Santa Monica and Long Beach getting more than 6 inches, the National Weather Service said.

Mudslides are a significant risk for three years after a fire and are especially likely anytime the rainfall rate reaches or exceeds 1 inch per hour, said Susan Cannon, a research geologist with the U.S. Geological Survey.

That's a likely scenario Wednesday in the area burned by last year's Station Fire, which charred 250 square miles above the suburbs tucked below the San Gabriel Mountains.

For all the perils of the torrential rains, there was a silver lining: The water is expected to help ease the effects of years of drought, and Thursday is expected to be dry, with sunshine. Light rain was forecast for Christmas Day in parts of California.