No Recession at Local 'Dollar' Stores

Chris Levister Special to the NNPA from the Blackvoicenews.com
Published: 23 December 2010 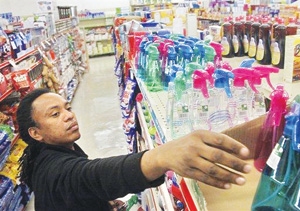 The trend began before the recession and escalated as the economy worsened. The stores, once known for their unruly shelves of odds and ends, have moved into the mainstream during the recession, attracting new shoppers with brighter, well-organized stores carrying a broader assortment of food, clothing, and home goods.

"I'm a big Christmas decorations buff. I want quality wrapping paper, trim, and unique ornaments for my tree but I don't want to pay upscale store prices," said Ms. Whitt, while piling gift boxes in a cart at the dollar store located on North Sierra Way in San Bernardino.

Chris Bremner restocks plastic containers at a Family Dollar discount store. Frugal shoppers are flocking to area stores, keeping cash registers sizzling. Like Ms. Whitt, more people are shopping at dollar stores during the sluggish economy, seeking deals on everything from food, clothing, and health and beauty items to batteries, decorations, storage containers, and sunglasses. The surge in business has led to increased profits and a growth in the number of dollar stores that sell inexpensive items, many priced at $1 or less.

It's December 2010, which makes it three years to the month since the Great Recession started. It has also been, as the U.S. Commerce Department reminded us this week, three years since retail sales went in the tank. As of last month, they're back. The Commerce Department said recently that the November retail sales are basically where they were in the fall of 2007. Stores are loving that news as are economists. Consumer spending is a huge engine for the American economy. But, unemployment is still high and personal income has been basically flat. Analysts say the economy is, at best, a mixed bag. So, why all the holiday cheer from consumers?

It's not necessarily optimism says Ms. Whitt. "Most of us feel pretty much the same about the state of the economy as we did last year. It's just that we're sick and tired of being frugal. What's life if you can't shop," she said with a big grin.

Sheryl Brattle who tracks consumer buying trends for the government says shoppers have gotten used to their new economic situation. "They've had their personal equity and income rocked. But, people are settling into a new reality. They've paid down their debt. They've postponed so many big ticket purchases that they have to get back in the stores."

But don't expect a return of the shopaholics of yesteryear. "What you're seeing is the new era of boom times for bargainistas," said Brattle. "Today's consumer is a new animal and 'dollar' retailers are bring them through their doors. If you think Christmas memories can't be bought for a buck, talk to Sue Roberts whose family spent $46.00 on chintzy trinkets. "People who never shopped in dollar stores suddenly began to trade down from luxury stores and mid-level department stores for better prices," she said. "I noticed there were Mercedes and BMWs in the parking lots of dollar stores," Ms. Brattle said. "When the recession hit, dollar stores really took off in popularity because people became very price-conscious. These stores started making significant profits and started increasing in numbers, size, and market base. I suspect that will continue, at least in the short term." As their popularity grows, dollar stores continue to open in the region and throughout the country.

"People are literally running out of cash on hand as the month goes on and they're looking for smaller package sizes," said Craig Johnson, president of the retail consulting and research firm Customer Growth Partners. "They may have $10, $20, $30 to spend getting toward the end of the month, and they have to be able to still feed the family and get diapers and so forth."

The dollar stores are pulling in shoppers like Elaine. An auto parts deliverer, she is the kind of price-sensitive shopper who knows that a bottle of ibuprofen from the dollar store near her home in Highland costs just $2.50 and has 100 pills, but at Wal-Mart, she will get fewer pills for about $5. So lately, she has been heading to dollar stores instead of Wal-Mart. "You don't have the big crowds and it's cheaper," she said holding the tangerine-scented hand soap, moisturizing cream, exfoliating body scrub, and a coordinated orange "back rope sponge."

San Bernardino handyman Curtis Bell came to the Sierra Way store to buy $1 work gloves but also purchased an array of $1 cleaning products. "I just bought a cleaning product yesterday at another store for $4.99 and it's only $1 here, so you're saving quite a bit," said Bell. He said he shops at department stores for better quality clothing and other items, but he can't beat the prices on cleaning products at dollar stores. On the way out of the store Bell picked up an ice cream bar for $1.00. "It's the very same ice cream bar selling for $1.99 at the Walgreen's across the street. Why should I pay a dollar more?"

"The new normal is a different set of behaviors and priorities," said Brattle. "In that way the recession has proven painfully good for many people. It's a big wake up call," she said.

"Unlike years past, my kids are not getting a boat load of cash and Christmas gifts, said Bell. "Instead they'll get things that they really want or need," he said.

As for those dollar bills Santa usually stuffs in kids Christmas stockings – analysts predict more of it will end up in newly opened savings accounts.