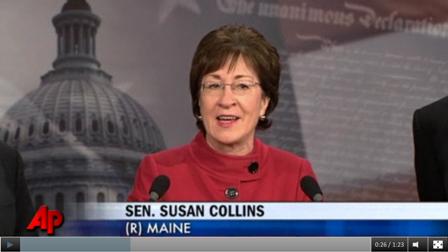 NEW YORK (AP) -- Word that the world's largest military power will allow gays and lesbians to serve openly in the military brought strong and swift reaction last week, with supporters declaring a civil rights milestone and detractors insisting it would weaken and divide the armed forces.

In New York, home to one of the nation's largest gay communities and a gay pride parade whose grand marshal this year was an openly gay, discharged serviceman, 28-year-old Cassandra Melnikow glanced at a news ticker in Times Square announcing the repeal and said: ``Excellent! It's about time.''

President Barack Obama had made repealing ``don't ask, don't tell'' a campaign promise in 2008, and rounding up a filibuster-proof majority in the Senate was a historic victory for him. By the time President Bill Clinton proposed allowing gays to serve in the military in 1993, they had been explicitly barred from military service since Wor ld War I.

Foes of lifting the ban argued that the military shouldn't be used to expand the rights of gays and that allowing them to serve openly would hurt troop morale and a unit's ability to fight -- the same arguments used against women and blacks.

In the end, Congress agreed to let gays serve only if their sexual orientation remained secret.

Repeal means that for the first time in U.S. history, gays will be openly accepted by the military and can acknowledge their sexual orientation without fear of being discharged. More than 13,500 service members have been dismissed under the 1993 law.

The change wouldn't take immediate effect, however. The legislation says the president and his top military advisers must certify that lifting the ban won't hurt troops' fighting ability. After that, there's a 60-day waiting period for the military.

Conservative organizations said the vote didn't reflect the sentiments of rank-and-file military members and should not have taken place so close to the end of the current session of Congress.

``The issue that really disturbs me more than anything else is that legislation that's controversial tends to be done in lame-duck sessions when a number of the elected representatives are no longer accountable to the people,'' said Len Deo, president of the New Jersey Family Policy Council.

The Massachusetts Family Institute said Republican senators who voted for the measure broke a promise they had made not to vote on the repeal until the federal budget was resolved.

``In doing so, they not only have put special interests above fiscal interests but also have put our troops at risk during wartime,'' said Kris Mineau, the group's president.

Some supporters of the repeal traveled to Washington to witness the vote, including Sue Fulton, a former Army captain and company commander who is spokeswoman for Knights Out, a group of 92 gay and lesbian West Point graduates who are out and no longer serving

Driving back home to North Plainfield, N.J., the 51-year-old Fortune 500 executive told The Associated Press that she thinks the repeal will have an effect on the civil rights of gays in America.

``As more people realize that gay and lesbian citizens are risking their lives to defend this country, perhaps they'll be more willing to acknowledge gays and lesbians as full citizens in other ways,'' she said.

Others monitored the vote from afar.

Several gay service veterans and others supporting the repeal stood around a small computer screen to watch C-SPAN coverage of the vote at San Francisco's Lesbian, Gay, Bisexual and Transgender Community Center. They erupted in cheers as the final tally was read.

Zoe Dunning, a retired U.S. Navy commander who continued to serve after declaring she was gay, cried and hugged other supporters.

``I'm living proof that the mere presence of an openly gay person in your unit does not harm either cohesion or morale,'' she said. ``After 18 years working on this, I witnessed the end to this destructive policy, and these are tears of joy... I'm so happy to be present for this day that I'd always dreamed of.''

Warren Arbury of Savannah, Ga., served in the Army for seven years, including three combat tours, before being kicked out two years ago under ``don't ask, don't tell.'' But he said he planned to re-enlist once the policy is officially abolished.

``As soon as they give me the go, I'm going to march into the recruiter's office,'' he said. ``And I want retroactive pay and rank.''

Arbury said a fight for other social changes -- such as allowing gays to marry and easing obstacles they face in adopting and raising children -- still lies ahead, however.

``I think it's one step in a very long process of becoming an equal rights citizen,'' he said. ``Even though this is really huge, I look at it as a chink in a very, very long chain.''

In Brazil, where soldiers have been kicked out of the military for publicly commenting on being gay, gay rights advocacy groups said the Senate's vote would help advance their cause worldwide.

``The vote was an extremely important step forward for the United States and a major event for the world,'' said Toni Reis, president of the Brazilian Association for the Rights of Gays, Lesbians, Bisexuals, Transvestites and Transsexuals. ``I just hope that Brazil and other countries follow the American example.''

Aaron Belkin, director of the California-based Palm Center -- a think tank on the issue -- said the vote ``ushers in a new era in which the largest employer in the United States treats gays and lesbians like human beings.''

For thousands of years, he said, one of the key markers for first-class citizenship in any nation is the right to serve in the military, and Saturday's vote ``is a historic step toward that.''