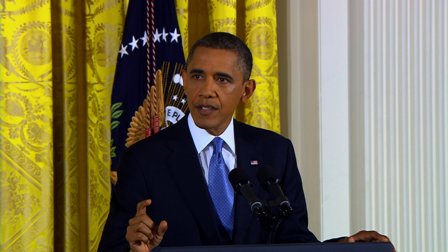 WASHINGTON (AP) -- President Barack Obama lobbied senators by phone Monday to back an arms treaty with Russia that he's called a national security imperative, as a top Senate Democrat conceded "house by house combat" would be needed to win enough GOP votes to prevail.

The president is continuing to call senators as he presses for passage of the New START treaty before Congress adjourns, according to deputy press secretary Bill Burton.

The White House and Senate Democratic leaders expressed confidence they'll ultimately garner the two-thirds vote the Constitution requires for the Senate to ratify the treaty.

Sen. Charles Schumer, D-N.Y., said Democrats have now picked up the support of GOP Sen. Thad Cochran of Mississippi, an encouraging sign for proponents as Cochran voted against moving ahead on the treaty last week. He said Democrats will need nine or 10 Republican votes to prevail.

Democrats expect to get 57 votes from their caucus, with Sen. Ron Wyden, D-Ore., absent due to cancer surgery on Monday. Four Republican senators - Richard Lugar of Indiana, Olympia Snowe and Susan Collins of Maine and George Voinovich of Ohio - have said they back the treaty.

"It's going to be a real slog, house by house combat if you will," Schumer told ABC's "Good Morning America" on Monday. "But I think we'll be there."

Obama wants the Senate to vote before January when Republicans increase their numbers by five, dimming the outlook for the accord. Complicating Obama's effort is Minority Leader Mitch McConnell, R-Ky., who said he will oppose the treaty and on Monday railed against the fierce partisanship.

"No senator should be forced to make decisions like this so we can tick off another item on someone's political check list before the end of the year," McConnell said on the Senate floor.

Just weeks after Obama's self-described "shellacking" in the Nov. 2 midterm elections, ratification of the treaty would cap a string of political victories for the White House. Congress endorsed the president's tax compromise with Republicans and voted Saturday to repeal the military's ban on openly gay service members.

In a nod to political sensitivities, Obama held off a celebratory bill signing for legislation ending the ban on openly gay servicemembers in the military until the outcome was clearer on the treaty, said one senior administration official who spoke on condition of anonymity to speak candidly about White House strategy.

The White House did not want to anger Republican senators opposed to lifting the ban as several could be critical to ratification of the treaty. Sen. John McCain, R-Ariz., for example, opposed ending the moratorium and the White House is hoping for his vote for the treaty.

Responding to McConnell, a clearly frustrated Sen. John Kerry said consideration of the treaty was delayed until after the election at the request of Republicans.

"Having accommodated their interests they now come back and turn around and say 'Oh you guys are terrible. You are bringing up this treaty at the last minute,'" Kerry said. "I mean is there no shame ever with respect to the arguments that are made sometimes on the floor of the United States Senate."

While McConnell's opposition did not come as a surprise, it unnerved the treaty's backers, who wondered how hard he would work to defeat the accord. Sen. Jon Kyl of Arizona, the No. 2 Republican in the Senate, also has said he couldn't support the treaty in its current form.

The Senate launched a sixth day of debate on the treaty on Monday, with a vote slated for Tuesday to move ahead toward a final vote. Lawmakers debated two amendments - one that would increase the number of weapons inspectors and another to raise the limits on the deployed strategic nuclear delivery vehicles from 700 to 720.

The two amendments would alter the treaty, effectively killing the accord as it would send it back to negotiators. Democrats were likely to prevail in defeating the two measures.

Obama and Russian President Dmitry Medvedev signed the accord - it is known as New START - in April. It would limit each country's strategic nuclear warheads to 1,550, down from the current ceiling of 2,200. It would also establish a system for monitoring and verification. U.S. weapons inspections ended a year ago with the expiration of a 1991 treaty.

Proponents of the treaty, including much of the military and foreign policy establishment, cite the renewed weapons inspections and say the pact would keep the two biggest nuclear powers on the path to reducing their arsenals. Opponents assert it would restrict missile defense and argue that it has insufficient procedures to verify Russia's adherence.

"It takes care of me," said Sen. Robert Bennett, R-Utah, who indicated he was leaning toward voting for the treaty. Snowe said it was "important for the president to be emphatic with respect to missile defense and modernization" of the remaining nuclear arsenal. Voinovich welcomed the statement.