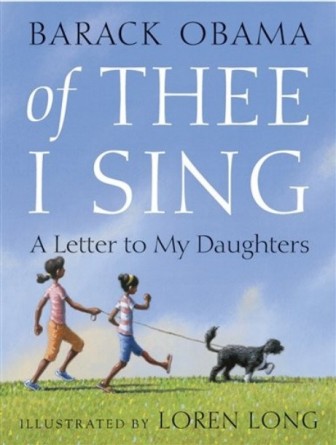 In the library of Long Branch Elementary School, some four dozen youngsters giggled and squirmed as Obama gave voice to passages from "Of Thee I Sing," an illustrated volume in the form of a letter to his daughters describing the lives of 13 great Americans. It was written in 2008 but just came out this fall, with proceeds going to a scholarship fund for the children of fallen and disabled soldiers.

"I wanted to borrow you guys, and read to you," Obama explained, sitting down on a wooden chair as the children sat cross-legged on the carpet.

He began with entries on Albert Einstein - "he was one of the smartest men ever" - and Jackie Robinson - "he was the first African-American to play in major league baseball" - before skipping to the end, and the entry on Abraham Lincoln.

"Everybody know who Abraham Lincoln is?" Obama asked, to a chorus of "Yes!" from the youngsters. "He helped to end slavery in the United States."

Obama left behind a signed copy for the school library. "You can read about all these other different people who are brave and imaginative and creative and smart, just like you guys are," he said. "I hope you enjoy it."

Obama also read the Chrismas poem "'Twas the Night Before Christmas" by Clement Moore, pausing so the kids could jump in at key points and making side comments on things like the couple of inches of snow Washington was dusted with Thursday. "I'm surprised you guys are in school 'cause a lot of times in Washington people don't go to school when there's even an inch of snow," he said.

He also answered a few questions on life in the White House and whether it's fun being president, before posing for pictures, shaking hands and wishing the children and their teachers happy holidays.

"I hope you guys have fun," he said. But he said as they open their Christmas presents he hopes they spend time thinking about the less fortunate. "Not everybody is as lucky as we are. There are a lot of kids out there who may not be able to get a lot of presents for Christmas because their parents don't have a lot of money."

"Of Thee I Sing" has done well in early sales. With a list price of $17.99, it sold 50,000 copies in the first five days, which its publisher, Random House Children's Books, said made it the fastest-selling picture book in company history. The volume was part of a $1.9 million, three-book deal Obama signed with Random House in 2004.