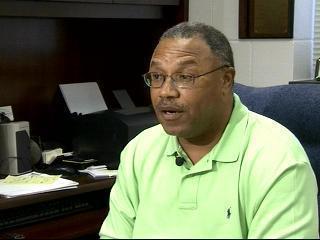 But she's different from her peers at Benvenue Elementary.

Since June 29, Brianna, 12, and her mother, Deborah, 50, have been residents of the United Community Ministries Bassett Center, a shelter for homeless families.

Balmer, who's never met her father, said she's afraid to tell her friends at school where she lives because she feels they will make fun of her and no longer be her friend.

Her mother, Deborah, said she knows at the elementary level, mean-spirited classmates would ultimately ostracize her.

``I can understand the point because kids go through a lot and other kids will have a tendency to pick on her,'' Deborah said. ``It's tough.''

Brianna is one of 502 students in the Nash-Rocky Mount school district identified as homeless as of Dec. 1.

One of the key indicators of family problems in the school district, specifically among homeless families, is the lack of attendance in school. Brianna received an award Friday for perfect attendance.

She is a member of what Chris Battle, the Bassett Center's executive director, calls ``the invisible population.''

Whether living in cars, motels, on the street or rotating between family member households, homeless children in Nash and Edgecombe counties are held to the same standards in the classroom as those more fortunate.

``In Chicago, New York and Los Angeles, you see homeless individuals and families just living on the street, but here, you really don't see it,'' Battle said. ``People aren't aware that there are homeless people here.''

Battle said when children are involved in the mix, the situation becomes worse.

One of the major problems affecting homeless students is the constant instability, Battle said.

``We've had (homeless students) actually living on the street in cars, and that alone will cause extreme levels of stress that a child should never have to deal with,'' Battle said.

``They might be living in a one-bedroom apartment with four or five different families, and that's a situation non-conducive for a child in school,'' Battle said. ``Where is homework and study time going to come in?''

Many of the families at the Bassett Center continuously move from family to family, friend to friend, week to week, he said.

``That really has to wear on a child. Children don't express it as well as adults do, but it starts to show out in their school work, performance and behavior patterns. That's when it affects them overall,'' he said.

``(Brinson) may notice that a child has not gone to school ... maybe they're here two days a week,'' Battle said. ``We're asking the mother Why is the child not in school?' and then we'll start to intervene. Our first and foremost concern is the child has to be in school.''

Brinson said the homeless children's grades are below average often from having to bounce around from school to school.

Battle said the Bassett Center is housing eight families with eight school-age children and has 41 families on its waiting list.

``About a year or so ago, we made it so the parent had to volunteer at the child's school,'' he said. ``The parents need to know that they need to interact with their children's academic life as well, which would probably never have happened outside the Bassett Center.''

There are 307 homeless students in elementary schools, 122 in middle schools and 73 in the high schools. She said the number has risen in recent years.

``Due to circumstances, situations and decisions beyond their control, homeless students, on average, are up to two years behind their peers,'' Eatman said. ``Imagine the emotional and educational struggles as a result of transition, moving from place to place, in-and-out of schools.''

Eatman said she empathizes with the families as she observes the impact of homelessness for many and the dilemmas students face each day.

``It is not unusual to see students make progress and thrive with academic assistance, educational programs and student support services only to withdraw as their parents move to other locations and school districts,'' she said. ``The students often feel frustrated, sad and hopeless. Continuous instability creates so many barriers to learning.''

One of the main insurances homeless students have is federal legislation entitled the McKinney-Vento Act, which originally was authorized in 1987 and then reauthorized by the No Child Left Behind Act of 2001.

The act defines ``homeless children and youth as individuals who lack a fixed, regular and adequate nighttime residence.''

Receiving subgrants from the McKinney-Vento Act, Nash-Rocky Mount Public Schools is able to ensure homeless children are able to attend their school of origin as opposed to having to rotate from school to school based on whatever district they relocate to.

The school district also holds 90-minute tutoring sessions staffed by volunteers every day after school at the middle and high schools. They're looking to expand the program to elementary schools in the near future.

Leroy Hartsfield, Nash-Rocky Mount assistant superintendent, said every student who comes in to the school district fills out a questionnaire.

``The questionnaire gives us a beginning point to see whether they are indeed homeless,'' Hartsfield said.

Once a family is identified as homeless at the beginning of the year, they remain in that status for the rest of the year, he said.

During the wintertime, Hartsfield said, families leave their residence to stay in the local motels, because ``you only have one bill.''

``The homeless situation is a problem, in general, not just in Nash-Rocky Mount,'' he said. ``With the economy as it is, it's not helping any.''

He said it could get worse.

Sheila Pittman, the school district's lead social worker, said many families recognize the cost-effectiveness of living in motels, and that the high unemployment rate and the high cost of utility rates is driving the problem.

When utilities are higher than the rent, a monthly payment minus a deposit for a motel room is the option many homeless families have pursued.

``Each population is represented (in the homeless data), but it's mainly minorities, African American and Hispanic families,'' Pittman said.