Video: Wikileaks Chief Says He Fears Us Ready to Indict 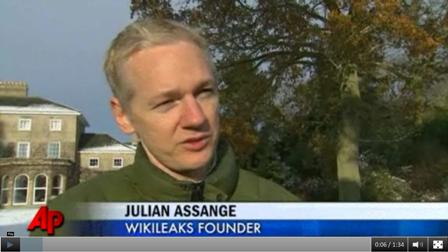 BUNGAY, England (AP) -- The founder of WikiLeaks said Friday he fears that the United States is preparing to indict him, but insisted that the secret-spilling site would continue its work despite what he claims is a dirty tricks campaign.
The Skanner News Video here
Assange spoke from snowbound Ellingham Hall, a supporter's 10-bedroom country mansion where he is confined on bail as he fights Sweden's attempt to extradite him on allegations of rape and molestation.

He insisted to television interviewers that he was being subjected to a smear campaign and "what appears to be a secret grand jury investigation against me or our organization."

Attorney General Eric Holder has said repeatedly that a criminal investigation of the WikiLeaks' continuing release of some 250,000 secret U.S. State Department cables is under way and that anyone found to have broken the law will be held accountable.

The Justice Department has provided no other public comment on who is under investigation or its legal strategy.

If pursued, the case could pit the government's efforts to protect sensitive information against press and speech freedoms guaranteed by the U.S. Constitution's First Amendment. The government suspects WikiLeaks received the documents from an Army private, Bradley Manning, who is in the brig on charges of leaking other classified documents to the organization.

Assange did not elaborate on the rumored grand jury investigation, but said he had retained an unspecified U.S. law firm to represent him.

A British High Court judge freed Assange on bail Thursday on condition he reside at the 600-acre estate in eastern England, wear an electronic tag and report to police daily. Assange spent nine days in prison after handing himself in to British police on Dec. 7. He is wanted in Sweden for questioning about sex allegations leveled against him by two women he spent time with while visiting the country in August.

Swedish officials - and the lawyer for the women involved - have denied accusations from Assange and his supporters that the allegations are politically motivated.

In an interview Friday on ABC's "Good Morning America," Assange said he had never heard Manning's name until the press began reporting it, though in another interview at Ellingham Hall he appeared close to acknowledging he was one of WikiLeaks' sources.

He called him "a young man somehow embroiled in our publishing activities."

"We can see that he's the only person, only one of our military sources, who has been accused," he said.

Assange has also warned of a smear campaign, saying that he expected new allegations about him to surface sometime Friday. It wasn't immediately clear what he was referring to, and no fresh details had been made public by early evening in Europe.

However, the details of Assange's personal life - and that of his accusers - have been under intense scrutiny since the Sweden rape allegations first became known, and in the past few days new details have leaked on to the Web.

Online gossip site Gawker.com has published what it claims are Assange's profile on matchmaking website OKCupid.com and excerpts from e-mails it said he exchanged with a young female love interest from several years back. The sometimes cringe-inducing details have been an online sensation.

WikiLeaks has not responded to requests for the comment on the personal details now circulating on the Web, but OKCupid's chief executive said that the profile alleged to be Assange's had been up since at least Dec. 31, 2006 - well before the Australian won fame for his online activism.

Assange said that the personal attacks were to be expected.

"It's the case with anyone that's the head of an organization that is exposing major powers and has major opposition that they will be attacked. Every aspect of their life will be scrutinized. This organization is no exception," he told the BBC late Thursday.

But Assange's accusers have felt the online heat too. WikiLeaks' Facebook site links to an article which names one of the women involved and attacks her as a "groupie" who engaged in a "carefully planned character assassination."

WikiLeaks did not immediately respond to a query about why it was helping to drive traffic to a site which appears to denigrate an alleged sex crime victim.

Assange is supposed to remain at the mansion in Bungay until his next hearing, scheduled for early January. A decision on his extradition is expected at a hearing in February.

Although he has promised to focus on clearing his name, he said his first priority was to his work - which he said would continue at a faster pace now that he was back in charge. "Now that I am back to assist the directing of our ship, our work will proceed in a faster manner," he told the BBC.