Video: Vick Says He Hopes to Own a Dog As a Pet Someday

By The Skanner News
Published: 16 December 2010 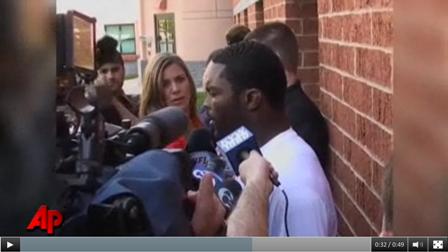 The Eagles quarterback told TheGrio.com in a video interview posted this week that he genuinely cares for animals and one day hopes to have a dog as a household pet, saying it would be just another "big step" in his rehabilitation process.

"I would love to get another dog in the future," Vick told TheGrio, a website that's affiliated with NBC and focuses on African-American issues. "I think it would be a big step for me in the rehabilitation process. I think just to have a pet in my household and to show people that I genuinely care, and my love, and my passion for animals."

Vick served 18 months in prison after being convicted in 2007 in the Virginia-based ring. The federal judge overseeing the case also prohibited him from ever owning another dog.

"Vick should be banned from owning dogs for life," Jane Dollinger, spokeswoman for People for the Ethical Treatment of Animals, said in a news release this week. "Just as convicted pedophiles aren't allowed free access to children, anyone who is responsible for hanging, electrocuting, or shooting dogs and who causes them to suffer in other unimaginable ways should never again be allowed access to dogs."

Since his release from prison, Vick has become an advocate for the Humane Society of the United States and makes school appearances to talk to students about his past. Vick said he's doing that work because he wants to.

Vick's on-the-field success this season has made his story more compelling - from star quarterback to reviled dogfighter to comeback kid. And now he's adding mentor to his resume.

"I think if I can help five or six kids daily, then I'm playing my position as a positive role model in our society," Vick told TheGrio. "I tell a lot of people that it's easy to do the wrong thing. It's hard to do the right thing."

Vick said he allowed outside influences to affect his behavior, but said prison helped him see the changes he needed to make.

"I hate to use our culture as an excuse, but it is what it is and that's what happened and that's the way I thought about it growing up," Vick told TheGrio about dogfighting. "This is just the way we were brought up."

The quarterback said he hopes his success with the Eagles will continue breaking the stereotype that black athletes can't or shouldn't play the position.

"I think if you're good and good enough to play the position, I think you'll get the opportunity," he said.