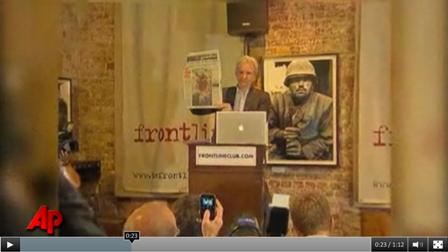 So-called "hacktivists" operating under the label "Operation Payback" claimed responsibility in a Twitter message for causing technological problems at MasterCard, which pulled the plug on its relationship with WikiLeaks on Tuesday.

The Skanner News Video here
MasterCard said it was "experiencing heavy traffic," but spokesman James Issokson told The Associated Press the company would not confirm whether WikiLeaks was involved. Issokson said MasterCard was trying to restore service Wednesday but was not sure how long that would take. The website's technical problems have no impact on consumers using credit cards, he added.

MasterCard is the latest in a string of U.S.-based Internet companies — including Visa, Amazon.com, PayPal Inc. and EveryDNS — to cut ties to WikiLeaks in recent days amid intense U.S. government pressure.

Visa said it was having no problems Wednesday.

The online attacks are part of a wave of support for WikiLeaks that is sweeping the Internet. Twitter was choked with messages of solidarity for the group, while the site's Facebook page hit 1 million fans.

Offline, the organization is under pressure on many fronts. Assange is in a British prison fighting extradition to Sweden over a sex crimes case. Moves by Swiss Postfinance, MasterCard, PayPal and others that cut ways to send donations to the group have impaired its ability to raise money.

The pro-WikiLeaks vengeance campaign appeared to be taking the form of denial of service attacks in which computers are harnessed — sometimes surreptitiously — to jam target sites with mountains of requests for data, knocking them out of commission.

PayPal's vice president of platform, Osama Bedier, said the company froze WikiLeaks' account after seeing a letter from the U.S. State Department to WikiLeaks saying that "WikiLeaks activities were deemed illegal in the United States."

"It's honestly just pretty straightforward from our perspective," he said, speaking at a web conference in Paris.

Per Hellqvist, a security specialist with the firm Symantec, said a network of web activists called Anonymous appeared to be behind many of the attacks. The group, which has previously focused on the Church of Scientology and the music industry, is knocking offline websites seen as hostile to WikiLeaks.

"While we don't have much of an affiliation with WikiLeaks, we fight for the same reasons," the group said in a statement. "We want transparency and we counter censorship ... we intend to utilize our resources to raise awareness, attack those against and support those who are helping lead our world to freedom and democracy."

The website for Swedish lawyer Claes Borgstrom, who represents the two women at the center of Assange's sex crimes case, was unreachable Wednesday.

The Swiss postal system's financial arm, Postfinance, which shut down Assange's bank account on Monday, was also having trouble. Spokesman Alex Josty said the website buckled under a barrage of traffic.

"Yesterday it was very, very difficult, then things improved overnight," he told the AP. "But it's still not entirely back to normal."

Ironically, the microblogging site Twitter — home of much WikiLeaks support — could become the next target. Operation Payback posted a statement claiming "Twitter you're next for censoring Wikileaks discussion."

Some WikiLeaks supporters accuse Twitter of preventing the term "WikiLeaks" from appearing as one of its popular "trending topics." Twitter denies censorship, saying the topics are determined by an algorithm.

Meanhwhile, the French government's effort to stop a company from hosting WikiLeaks has failed — at least for now.

The Web services company OVH, which says a client hosts the wikileaks.ch website, sought a ruling by two courts about the legality of hosting WikiLeaks in France. The judges said they couldn't decide right away on the highly technical case.

WikiLeaks angered the U.S. government earlier this year when it posted a video showing U.S. troops gunning down two unarmed Reuters journalists. Since then, the organization has leaked some 400,000 classified U.S. war files from Iraq and 76,000 from Afghanistan that U.S. military officials say contained information that could put people's lives at risk.

Those cables have embarrassing U.S. allies, angered rivals, and reopened old wounds across the world. U.S. State and Defense department officials say foreign powers have curtailed their dealings with the U.S. government since the documents hit the Internet.

U.S. officials have directed their ire at Assange but even American allies have begun to ask whether Washington shares some of the blame.

"The core of all this lies with the failure of the government of the United States to properly protect its own diplomatic communications," Australian Foreign Minister Kevin Rudd said Wednesday. "To have several million people on their distribution list for a quarter of a million cables — that's where the problem lies."

The latest batch of cables released Wednesday showed that the British government feared a furious Libyan reaction if the convicted Lockerbie bomber wasn't set free and expressed relief when they learned he would be released in 2009 on compassionate grounds.

Meanwhile, Assange faces a new extradition hearing in London next week, in which his lawyers say they will reapply for bail. The 39-year-old Australian denies two women's allegations in Sweden of rape, molestation and unlawful coercion, and is fighting his extradition to Sweden.

In a Twitter message Wednesday, WikiLeaks spokesman Kristinn Hrafnsson shrugged off the challenges and noted that the site is mirrored in over 500 locations by supporters.

"We will not be gagged, either by judicial action or corporate censorship ... WikiLeaks is still online," Hrafnsson said.

Malin Rising in Stockholm, Frank Jordans in Geneva, Jamey Keaten in Paris and Cassandra Vinograd in London, Rod McGuirk in Canberra, Tia Goldenberg in Jerusalem, Michelle Chapman in New York and Anne Flaherty in Washington contributed to this report.