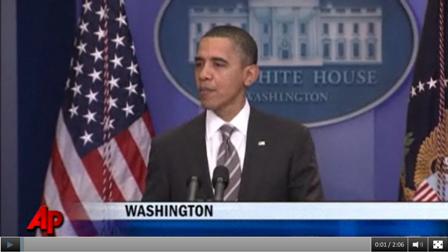 WASHINGTON (AP) — The White House leaned hard on fellow Democrats Wednesday to support President Barack Obama's tax deal with Republican leaders, saying it would be foolhardy and "borderline immoral" to allow taxes to climb on the middle class and benefits to run out for the long-term jobless.

But House Democratic leaders protest that the overall package gives up too much to the wealthy. They're putting Obama on the defensive, even as the deal picks up support among GOP lawmakers and business groups.

Some Democrats are unhappy that Obama agreed to extend expiring tax cuts not just for the middle class but also for higher earners, and that he agreed to impose a lower estate tax on wealthy heirs. Both provisions are seen by many Democrats as giveaways to the rich that will do little to help the economy.

In return, Democrats would get extended jobless benefits for people who have been unemployed for long stretches. Workers would also see their share of Social Security payroll taxes cut by nearly a third for the coming year, a boost in take-home pay meant to encourage spending and aid the economy.

"So far, the response has not been very good," House Speaker Nancy Pelosi said. She called the estate tax provision "a bridge too far."

If Democrats kill the package, it would mark a stunning defeat for Obama and a huge political bet that voters will blame Republicans as much as Democrats for an impasse that would lead to higher taxes starting Jan. 1. Many congressional insiders doubt that Democrats will take that gamble. But liberal lawmakers' discontent is hard to measure in the wake of last month's big election setbacks.

Senior White House adviser David Axelrod said Wednesday he believes disenchanted Democrats will decide to vote for the package when they realize how angry voters will be "if they wake up on Jan. 1" with a substantial tax increase, roughly $3,000 a year for a typical family.

He said Obama had no choice but to accede to Republican demands for continuing existing rates for the wealthy in order to spare higher rates for the middle class. He also said the president was forced to make concessions to protect the jobless.

"We're not going to play Russian roulette with the lives of the American people, with all the millions of people that are going to lose their unemployment insurance right now without this bill going forward," Axelrod said in an interview on ABC's "Good Morning America."

In an interview on NBC's "Today" show, he said it would be "borderline immoral" to allow taxes to go up in the midst of economic hard times.

If Congress fails to act this month, taxpayers at every income level face a significant tax increase at the start of the year. The new Congress — with Republicans controlling the House and Democrats the Senate — still could extend the tax cuts retroactively next year. But that would make it difficult for employers to withhold the proper amount of taxes from workers' pay.

Payroll companies say it's already too late for many employers to adjust withholding by the start of the year, meaning many workers will have to make adjustments, regardless of what Congress does.

Despite their minority status, Senate Republicans last week blocked Obama's long-promised bid to end Bush-era tax cuts for households earning more than $250,000. Republicans insisted that all the tax cuts be extended, for rich and poor alike.

"I have not been able to budge them," Obama said at a televised news conference Tuesday. Without a compromise, he said, 2 million unemployed people "may not be able to pay their bills, and tens of millions of people who are struggling right now are suddenly going to see their paychecks smaller" because of income tax increases.

"I'm not here to play games with the American people or the health of the economy," he said.

Under the proposal cutting back Social Security payroll taxes, workers would pay a 4.2 percent tax rate instead of 6.2 percent — a $120 billion tax cut for workers, starting on Jan. 1.

The package would continue other programs such as enhanced tuition tax credits and tax breaks for businesses that hire new workers. It would impose a 35 percent federal estate tax, but each spouse could exempt up to $5 million from taxation.

Under current law, the estate tax, which was repealed for 2010, is scheduled to return next year with a top rate of 55 percent.

Officials said that, overall, the proposal could increase federal borrowing by $900 billion.

The lower estate tax has emerged as the biggest sticking point among House Democrats.

"That's the topper," said Rep. Bill Pascrell Jr., D-N.J. "I understand give and take. But I have to resolve in my mind if this was too much giving."

Senate GOP leader Mitch McConnell of Kentucky said he expects "a large majority" of Senate Republicans to support the package.

Both the Business Roundtable and the U.S. Chamber of Commerce — two business groups that have been at odds with the president's economic policies — praised the package.