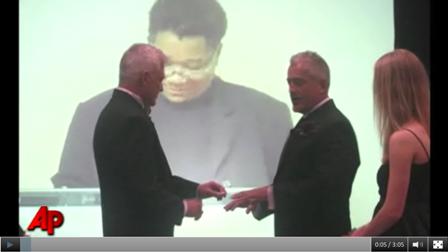 SAN FRANCISCO (AP) -- A line of questioning at an appeals court hearing over California's gay marriage ban suggested the three judges could issue a decision that would legalize same-sex marriage in that state but leave intact bans in other western states under the court's jurisdiction.

The 9th U.S. Circuit Court of Appeals heard nearly three hours of arguments Monday during a televised hearing that reached a nationwide audience anxious for a final decision on whether voter-approved Proposition 8 and similar same-sex marriage bans violate the U.S. Constitution.

The judges appeared troubled over whether they could recognize marriage as a civil right for all same-sex couples or only those in states that already grant gays the rights of marriage without the title.

Theodore Olson - who argued a portion of the case on behalf of the two same-sex couples who sued to overturn Proposition 8 and persuaded a lower court to strike it down - said denying gays the right to wed constitutes discrimination that cannot be justified under any circumstances.

His oratory prompted Judge Stephen Reinhardt, the panel's most liberal member, to ask if Proposition 8 were a unique case because it amended the California Constitution to outlaw same-sex marriages five months after the state Supreme Court had legalized them.

"Your closing speech would require a holding that any state that did not permit gay marriage would be in violation of the Constitution," the judge said. "There is a possibility, I think in this case, that Proposition 8's withdrawal of the right of marriage from gays and lesbians is unconstitutional under the circumstances that they enjoyed that right, that they are given every aspect of marriage and the only thing taken away is the honorific of marriage."

Attorney Charles Cooper, who represents sponsors of the 2008 measure, argued that same-sex couples can be treated differently when it comes to marriage without running afoul of the Constitution because "sexual relationships between men and women naturally produce children."

"Society has no particular interest in a platonic relationship between a man and a woman no matter how close it might be, or emotional relationships between other people as well, but when the relationship becomes a sexual one, society has a considerable interest in that," Cooper said. "Its vital interests are actually threatened by the possibility of an unintentional and unwanted pregnancy."

Mondays' hearing also focused on whether Proposition 8's supporters have legal standing to challenge a lower court ruling that the ban was unconstitutional. The issue surfaced after outgoing California Gov. Arnold Schwarzenegger and Attorney General Jerry Brown both refused to challenge the ruling that overturned the ban.

The panel appeared dubious about whether the ban's supporters were qualified to appeal but also seemed worried about allowing the governor and attorney general to effectively kill Proposition 8 by refusing to defend it.

Opponents of Proposition 8 contend it violates the due process and equal protection rights of gays and lesbians under the U.S. Constitution by denying them the right to marry the person of their choice and by singling them out for disparate treatment without a legitimate rationale.

C-SPAN's coverage of Monday's hearing gave the public outside the 9th Circuit headquarters in San Francisco its first - and possibly last - direct look at the debate raging in the landmark challenge that could impact gay marriage bans in other states.

Matt Walker, 60, of Los Angeles watched the hearing with about 20 other people at the Los Angeles Gay and Lesbian Center in West Hollywood and said the lives of many of his friends would be affected by the final decision. He found the hearing fascinating.

"Nobody from either side was getting a pass," he said.