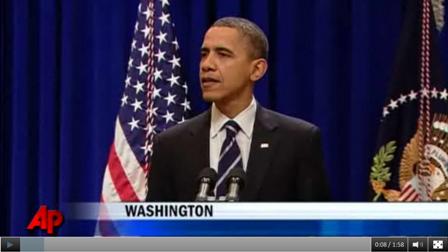 WASHINGTON (AP) -- The White House on Tuesday urged congressional Democrats to quickly embrace a contentious tax cut plan that President Barack Obama cut with Republicans, arguing that the rank and file need to move on to other issues before the party loses control of the House in January.

White House aides said Vice President Joe Biden will ask Democratic lawmakers to swallow their objections to the administration's proposed compromise with the GOP when he attends a closed luncheon with senators at the Capitol. Obama's plan would extend Bush-era tax cuts for all Americans, including the richest, while also extending unemployment benefits and reducing payroll taxes for a year.

Democratic leaders gave a cool reception to Obama's proposals but did not rule them out. House Speaker Nancy Pelosi said the compromise plan shows that Democrats want to help low- and middle-income workers while the GOP's chief concern is the wealthiest Americans.

"We will continue discussions with the president and our caucus in the days ahead," Pelosi, D-Calif., said in a statement issued 18 hours after Obama laid out his plan.

Before the GOP assumes the House majority next month, the White House wants Congress to take up ratification of a new nuclear treaty with Russia, then address the Dream Act, a measure to give young people whose parents brought them into the U.S. illegally a path to legal status. Democrats also want to vote on whether to repeal the military's policy that prevents gays from serving openly in the armed services.

Republicans control neither the House nor the Senate - and certainly not the White House. But they largely dictated the terms of Obama's proposed tax-cut compromise, which disgruntled House and Senate Democrats will discuss in separate closed meetings Tuesday that are likely to be rowdy.

Republicans prevailed on their biggest demand: continuing Bush administration tax cuts for the wealthiest Americans, despite Obama's 2008 campaign promise to let them expire for households earning more than $250,000 a year. Obama, while acknowledging Democratic unrest, agreed to extend the tax breaks for two years, whereas Republicans wanted a permanent extension.

Obama explained Monday that the concession was the only way to prevent a congressional impasse that would cause the tax cuts enacted in 2001 and 2003 to expire, as scheduled, for all taxpayers. With 9.8 percent of Americans unemployed, he said, that would be "a chilling prospect."

Liberal groups were furious at his willingness to bend, but Obama said he rejects "symbolic victories" that hurt average Americans.

His plan also would renew jobless benefits for the long-term unemployed, and grant a one-year reduction in Social Security taxes paid by workers but not by employers.

The president had barely stopped speaking Monday before top Republicans applauded his proposals, while most Democrats kept a sullen silence.

Senate Minority Leader Mitch McConnell, R-Ky., thanked Obama for "working with Republicans on a bipartisan plan to prevent a tax hike on any American and in creating incentives for economic growth."

Because they hold solid majorities in both chambers, Democrats must provide many votes for the tax package to become law, even if Republicans overwhelmingly support it.

Some Democrats quickly denounced the plan. "Senate Republicans have successfully used the fragile economic security of our middle class and the hardship of millions of jobless Americans as bargaining chips to secure tax breaks for the very wealthiest among us," said Sen. Tom Harkin, D-Iowa.

Urging his colleagues to quickly back the compromise was Sen. Joe Lieberman, I-Conn., who caucuses with the Democrats. "This tentative agreement is an example of Washington working across party lines to confront the challenges facing our nation," said Lieberman, who is up for re-election in 2012.

The emerging agreement includes tax breaks for businesses that the president said would contribute to the economy's recovery from the worst recession in eight decades.

The proposed Social Security tax cut would apply to virtually every working American. For one year they would pay 4.2 percent of their income, instead of 6.2 percent, to the government retirement program, fattening U.S. paychecks by $120 billion in 2011.

Someone earning $40,000 a year would receive a $800 benefit, and a $70,000 earner would save $1,400, officials said. More than three-fourths of all Americans pay more in these so-called payroll taxes than in federal income taxes.

The White House said money from other sources would be shifted so the Social Security trust fund loses no revenue.

Obama said he reluctantly made another concession to Republicans, concerning the estate tax. It would tax estates worth more than $5 million at a rate of 35 percent, a GOP goal. Democrats favored a $3.5 million threshold, with a 45 percent tax on anything higher.

Obama's willingness to compromise with Republicans comes a month after the GOP won resounding victories in congressional, gubernatorial and state legislative elections.

Addressing his liberal critics Monday, Obama said, "Sympathetic as I am to those who prefer a fight over compromise, as much as the political wisdom may dictate fighting over solving problems, it would be the wrong thing to do."

"I'm not willing to let working families across this country become collateral damage for political warfare here in Washington," he said.

Under his plan, unemployment benefits would remain in effect through the end of next year for workers who have been laid off for more than 26 weeks and less than 99 weeks. Without an extension, 2 million individuals would have lost their benefits over the holidays, the White House said, and 7 million would have done so by the end of next year.

Obama's proposal also would extend a variety of other tax breaks for lower and middle-income families, including the Earned Income Tax Credit and the child tax credit.